From abuse survivor to Outstanding Citizen 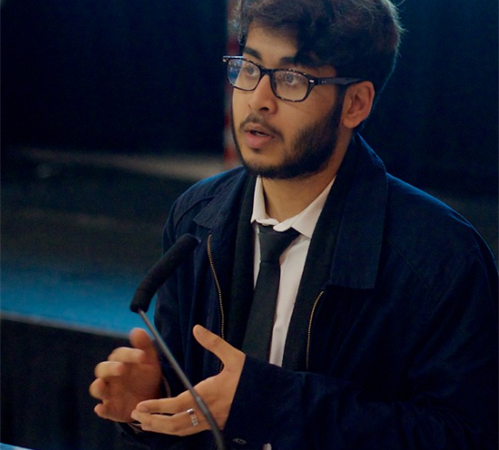 A man who was sexually abused as a child and  now works to prevent other young people experiencing similar trauma has been shortlisted for a prestigious award.

Adam Shaikh from Smethwick was abused by a distant relative aged eight. Now, twelve years on, he has so far advised hundreds of parents in his local area how to keep their children safe.

The PCC, David Jamieson, has shortlisted Adam for the Outstanding Citizen Award.

The abuse Adam suffered as a child set him on a downward trajectory and it wasn’t long before he was involved with street gangs.

But aged 16 he made the decision to turn his life around and use his energy as a force for good.

Now, far from being involved in criminality, Adam helps children stay out of harm’s way. In just one year he has reached out to more than 300 parents and advised them what they can do to keep their children safe online.

His speeches to parents include his own personal story as well as advice on installing internet filters on their home broadband to help protect youngsters from online grooming and adult content.

The West Midlands Police and Crime Commissioner, David Jamieson, said: “Adam is an inspiration to us all.

“What he went through at such a young age nobody should be forced to endure. To some degree, it is understandable that after experiencing that level of abuse he began to make some bad life choices.

“But to see him reverse those decisions, turn his life around and actually dedicate his time to advising and helping others is remarkable and uplifting.

“He is an example to us all. I can’t thank him enough.”

Commenting on his shortlisting for the Outstanding Citizens Award, Adam said: “When I was told I had been shortlisted, I was really surprised.

“To receive this recognition is amazing because it motivates me to keep going. It is proof my work is being heard.

“However, the most important thing is that I use this award as a platform and a greater opportunity to help others. It’s vital we get the message out to young people and their parents that nobody should have to suffer in silence and stay a victim forever.

“Abuse thrives in secrecy. Nobody will know what has happened until you make your story heard.  Justice is what you deserve. You’re a survivor.”

When Adam finishes his degree at the University of Birmingham he intends to continue helping young people by keeping them safe. He also plans on continuing with his music career, which he found to be his crutch during bad times in the past. He hopes his music can act as an inspiration for other young people.

PCC has agreed to loan £100,000 to organisations who promise to reduce crime