Nominate your community hero for an award 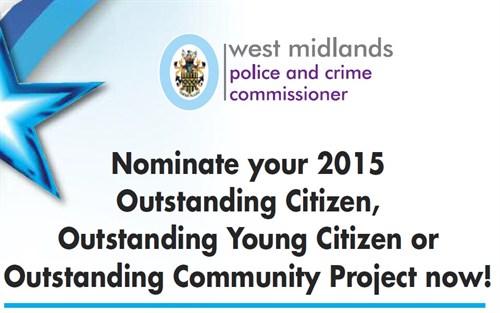 There is still time for people across the West Midlands to nominate someone who deserves a special thank you for their tireless services to the community.

West Midlands Police and Crime Commissioner, David Jamieson, is giving people the opportunity to show their appreciation to unsung heroes or heroines who are worthy of special recognition for outstanding acts of good citizenship.

Nominations have already been flooding in since January but there is still time to nominate your special someone. There are three categories:

Commenting on the awards, David Jamieson said: “Amongst the nominations already received are many accounts of selfless devotion to the local community and acts of bravery. Although each story is different, what links them all is that each nominee has put others needs before their own. It really is quite humbling to know that there are so many kind and good-hearted members of the community willing to help their neighbours and loved ones.”

Nominations are welcomed from anyone who knows of a volunteer, community member or community group that has shown consistent dedication to their neighbourhood, given up their own time to help others, contributed to community safety or helped to reduce crime and disorder.

Further details and nominations forms are available from www.westmidlands-pcc.gov.uk or by phoning 0121 626 6060 for an application form.

Nominations close on 31st March 2015 and the winners will be announced at a special ceremony later this year.