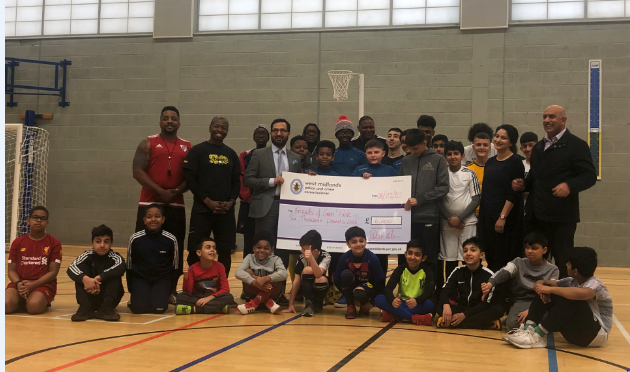 The Friends of Green Park have sent a message of thanks to the West Midlands Police Crime and Commissioner, for a £6,000 donation from Active Citizens Fund to help pay for all-year round sports equipment and coaching sessions for local youngsters.

Promoted through local Primary and Secondary schools, the free football and cricket sessions are designed to help encourage local youngsters to stay out of gangs and off the streets. St Thomas’s Ward in Kates Hill is one of the most deprived areas of the country, suffering from high levels of unemployment, as well as many other issues including anti-social behaviour.

The Friends include local councillors, the Police, community workers and volunteers. Together, they have organised numerous sporting events including a community football festival for all ages, genders and abilities which was attended by large numbers of the local community, including 40 young people. More events like this are planned in the future.

The Active Citizens Fund totals more than £400,000 and is money which has been allocated from items seized from criminals under the Proceeds of Crime Act. Each year, the Police and Crime Commissioner invites local community groups to bid for a grant from this fund. The money must go to community projects and cannot be spent on recruiting officers.

“Through our Active Citizens Fund, a total of over £400,000 is ploughed back into the local community every year. The Friends of Green Park are doing a magnificent job in supporting young people as well as the whole community. I am delighted we have been able to make this £6,000 grant to support their vital work, and paid for by money seized from criminals.”

Councillor Shaukat Ali said; “On behalf of the Friends of Green Park, I would like to thank the Assistant West Midlands Police and Crime Commissioner for this very generous donation. Sport such as cricket and football play such a vital role in the health and wellbeing of local communities. Our intention is to put together cricket and football teams to play friendly matches in the summer and beyond and this grant will help to ensure our work continues.”