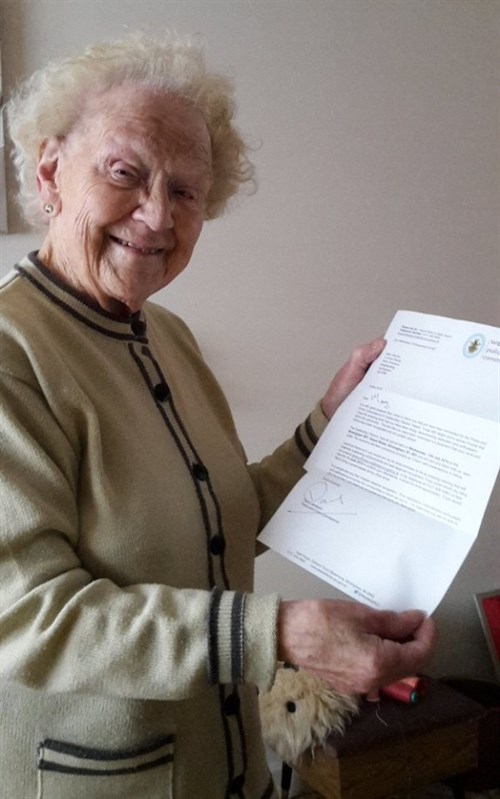 A 94-year-old great-grandmother is in the running to be named the West Midlands Police and Crime Commissioner’s Outstanding Citizen of the year.

Mary Harvey joined Perry Common Community Watch at the tender age of 82 and has since gone on to join the Friends of Witton Lakes group and be a Duckling Watch warden. She also goes on daily litter picks, cleans dirty street signs, removes graffiti, fundraises for different charities and builds bridges within the community. Mrs Harvey also works closely with Kingstanding Neighbour Policing Team and is involved in both their Speed Watch and Tasking Forum.

Mary, of Perry Common, is in the running to be named David Jamieson’s Outstanding Citizen 2016 at an awards ceremony at The REP in Birmingham on July 13.

The great-grandmother said: “I joined the neighbourhood watch when I was 82 after my husband of 60 years, Dennis died. In the two years following his death, I didn’t really know what to do with myself and then one day my friend Linda stopped me in the street and said ‘how are you?’. I replied that I was ‘so-so’ and ‘the days are long and miserable’ so she advised joining the community watch. I was unsure at first but finally thought ‘come on, pull your socks up and get out’.

“I remember that first visit I met two police officers who were so lovely and caring and I got on so well with the others that I decided to stay. I really love it – it gets me out the house and I love mixing with people. Sometimes I struggle to fit everything in but I love getting out and mixing with people and helping others.

“I’m really passionate about Witton Lakes: they are so beautiful and now have a wonderful young park warden looking after them. We walk around in a figure of eight making sure everything in the park is OK and talking to people. We’re looking to raise funds for a new nesting raft for the ducklings and I’m also raising money for the hedgehogs now as well. Whenever someone puts money in the box, I get my new little hedgehog puppet out and say ‘thank you’ in a funny voice – we don’t do normal round here!

“I think it’s important to have pride in your neighbourhood. We should all pull together to make sure it’s clean and everyone knows each other. I still sweep the pavements and clean the road signs. I love being neighbourly and kind. I like to stop people in the street and say ‘hello, how are you?’ I want them to know that I care.

“I couldn’t believe it when I got my nomination for the Commissioner’s award. I was thrilled to bits. I was honoured and I would encourage other people – of any age – to get involved in their community in the same way. I love it.”

West Midlands Police and Crime Commissioner DavidJamieson said: “This is our chance to say ‘thank you’ to those people who make the West Midlands a better place.

“Mary is an inspiration to us all: she is kind, she is caring and she puts others before herself. Her tireless efforts make her community a better place to live and work. I wish her the very best of luck for awards night.”