A Mental Health Champion for the West Midlands 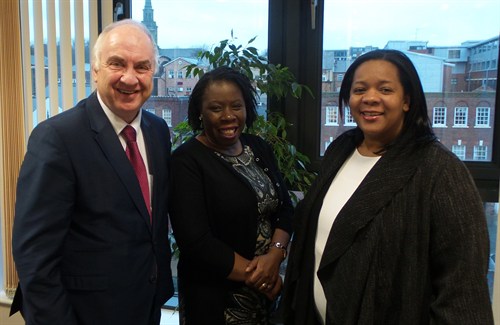 Police and Crime Commissioner David Jamieson has appointed a champion for mental health, to address a major cause of vulnerability that disrupts the lives of almost a quarter of us at some point.

David Jamieson said:  “Mental health can have a massive impact on the resources of the police and other partners in the public sector.  West Midlands Police has made great progress over the past two years, with almost no detainees with mental health problems being kept in police custody, a successful new street triage programme in Birmingham and Solihull, and new liaison and diversion pilot projects across many of our custody blocks.

“The Mental Health Champion will work with police and partners to make even more improvements as we believe that if we deal with mental health problems, resources will be used much more effectively and our communities will be safer and more pleasant places to be.”

Newly appointed Mental Health Champion Councillor Paulette Hamilton has a wealth of experience as a mental health practitioner.  She also serves as a Birmingham City Councillor where she takes a keen interest in mental health and works hard to make improvements for the most vulnerable people in our communities.

Councillor Paulette Hamilton said:  “Mental health is frequently a problem for perpetrators of crime and also for victims.   During my one year appointment I will seek to raise awareness and understanding of mental health as a major cause of vulnerability and will also be asking police, health care providers and local councils to make sure that mental health is considered across all of their work.

“For example, many people leaving prison have suffered from poor mental health, and if this isn’t tackled they are more likely to re-offend.”

“Another consideration will be the mental health care provision for young people,” she added.

“The Government promised extra resources to provide for young people with mental health difficulties but the reality is that resources have been reduced.  One of the first jobs I will do is to meet with leaders from the Mental Health provider trusts to ascertain the areas of most need and what the Police and Crime Commissioner can do to assist.”