A tribute to Joan Campbell 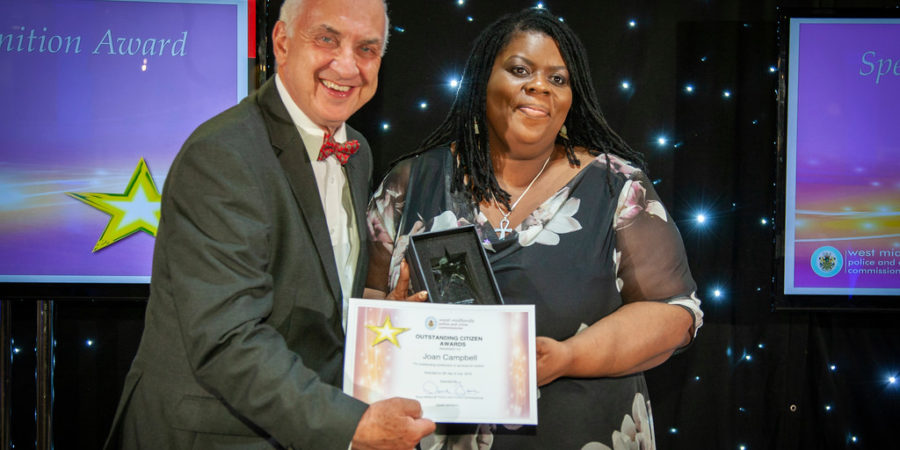 It is with great sadness that the Police and Crime Commissioner, David Jamieson, and his team learned of the passing of Joan Campbell.

Joan Campbell was born and bred in Handsworth, Birmingham and has dedicated her working career to helping those most in need.  She has been an inspirational leader, mentor, and provider of support services.

Joan’s work includes supporting former gang members and their families by helping them to look at changing negative behaviour as part of reintegration to society after serving a prison sentence.

The West Midlands Police and Crime Commissioner, David Jamieson, said: “Joan’s life time of dedicated work helping others has made an immeasurable impact.

“She has changed lives and there are many people who feel indebted to her.

“I would like to personally place on record my appreciation for all the work that she did for us, the support that she gave to some of the most devastated victims of serious crime, in their time of extreme need, and the role that she played in shaping the work of the Commission on Gangs and Violence.”

In 2011 Joan established Community Vision CIC, which runs a specialist BME victim support service for those affected by serious crime. Community Vision prides itself on a model of intervention that focuses on helping not just the individual, but is a whole family intervention.  All of this work led the PCC to commission Community Vision in 2012, enabling Joan to expand her programme of work, including a dedicated domestic violence programme for survivors: ‘Restoring Queens’.

In 2016 Joan carried out research on behalf of the PCC that fed into the Commission on Gangs and Violence. She worked with girls affected by gang culture and women and families. Joan also brought the voice of the victim to feed into this much needed report as many who took part in the consultations that she organised had lost loved ones to violence. Joan was also an experienced trainer who had delivered training to many professionals in both the statutory and voluntary sectors, on the subject of Gangs and Violence.  She brought to life the realities for young people in gangs, and worked with the PCC to develop the 24 recommendations in the report to ensure that they were meaningful and would have an impact.

The PCC gave Joan an Outstanding Citizens Award in July 2018 as recognition for all the work that she had been doing, and to say thank you for the immense time she gave to others.  She will leave a lasting legacy.  We are honoured to have known and worked with Joan and we will ensure that the work that she started while working on the Commission is completed.