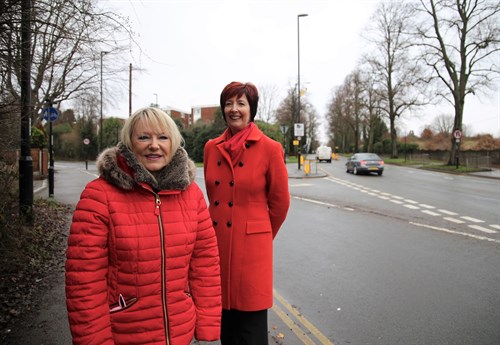 The Assistant Police and Crime Commissioner, Lynnette Kelly is supporting the introduction of Average Speed Enforcement cameras on two of Coventry’s busiest roads.

The speed cameras will register the average speed of drivers along different stretches of Ansty Road and London Road.

The cameras have been installed by Coventry City Council in partnership with West Midlands Police, to help reduce the speed of motorists.

Both of the cameras have been activated today.

The Assistant Police and Crime Commissioner, Lynnette Kelly, said: “We promised to improve road safety and do all we could to reduce the number of injuries and deaths on our roads. That is why I am pleased to have helped get these cameras installed, and look forward to more across the West Midlands.

“These cameras are not being put in place to raise money, they will only cover the costs to West Midlands Police for enforcement and are designed to keep people safe.

“Speed is one of the biggest causes of deaths on the road and one of the biggest issues that local people raise with me on a daily basis. Coventry City Council is installing the cameras and the police is supporting them by processing and enforcing the fines.  This shows that we are on the side of the overwhelming majority of motorists who drive safely and sensibly.”

Average Speed Cameras record the car registration and calculate its speed by measuring the time taken to travel between set points and are seen as an effective way of reducing speed, as they can cover a longer stretch of road compared to other cameras.

The Council is responsible for setting speed limits in the city and works closely with West Midlands Police which enforces them.

Cllr Abdul Salam Khan, Coventry City Council’s Deputy Leader with responsibility for enforcement, said: “We have been running initial checks on the equipment and have been letting motorists know that the cameras will soon be live.

“Although West Midlands Police will be enforcing the limits we hope that the fact the cameras are in place will be a warning to drivers.

“The vast majority of people respect speed limits, but there have been examples were irresponsible motorists have ignored these limits resulting in avoidable collisions that have affected many people.

“The cameras are in response to concerns raised by a number of residents, and we’ve always made it clear that road safety is something we are prioritising and willing to invest in to ensure that our roads are made safer.”

“Educating drivers is our priority.”

The cameras on London Road cover the stretch from Allard Way to the A46, with the Ansty Road cameras covering from Dane Road to Clifford Bridge Road.

Income from motorists paying for speed awareness courses will also be used to cover police costs and will help to maintain and potentially extending the scheme.