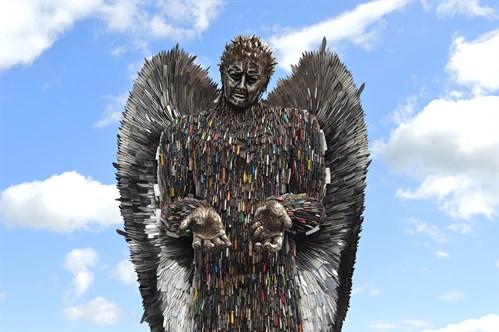 The Assistant Police and Crime Commissioner is welcoming the installation of a huge knife sculpture at Coventry Cathedral.

Dr Lynnette Kelly who is also a Coventry Councillor, attended the unveiling of the sculpture in the city today.

The Knife Angel is made of over 100,000 confiscated knives and was created in response to the growing issue of knife crime across the UK.

The statue symbolises the ‘Save a Life, Surrender your Knife’ campaign and uses weapons collected from 200 Police weapon surrender bins across 43 forces the country, including from the West Midlands.

The sculpture was created to raise awareness around the devastating impact knife crime has on young lives, families and communities.

The Knife Angel will stand outside Coventry Cathedral until April 23 and will act as a physical reminder of the effects of violent crime.

The 27-foot high structure was created by artist Alfie Bradley, who was employed and commissioned by the British Ironwork Centre in Shropshire.

The artwork took four years to assemble and has previously stood in other UK cities such as Liverpool and Hull.

The Assistant Police and Crime Commissioner, Dr Lynnette Kelly said: “The arrival of the Knife Angel in my home city of Coventry is timely.

“We are currently facing a knife crime epidemic, both here in the West Midlands and the rest of the Country.

“The structure stands as a stark reminder of the devastating effects of violent crime.

“I hope the presence of the Knife Angel will bring people together to tackle rising knife crime in the region”.