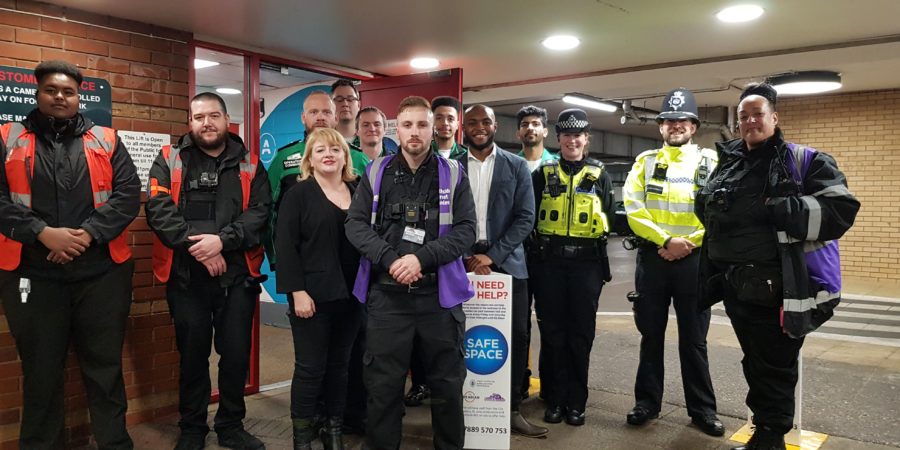 A Birmingham city centre Safe Space facility, which was trialled over the summer to provide people with a place to go if they are need help on a night out, has been hailed a success.

The Safe Space, located at leading leisure destination The Arcadian Centre, is designed to help those who feel unwell or need assistance. Support is on hand for those who become detached from their group of friends, or if they need a taxi home. The facility is supported by a dedicated team from St John’s Ambulance.

Since the three-month initiative, funded by West Midlands Police and Crime Commissioner and Southside Business Improvement District, was launched in June, crime in Southside has fallen, as have incidents of anti-social behaviour.

Now, LCP, the commercial property and investment company that owns and manages the centre, has now agreed to fund the initiative for a further three months after West Midlands Police statistics demonstrated that it had had a positive effect.

According to figures released by West Midlands Police, 66 visits to hospital were saved and 115 people were treated in June and July, by St John Ambulance volunteers who run the Safe Space medical facility every Friday and Saturday between midnight and 5:30am. St John’s crews dealt with a range of casualties, most were intoxicated, however they also dealt with a number of assaults, drug use and helping those suffering with mental health problems.

The Anti-Social Behaviour Chart for Southside also reveals that incidents fell 72% between the two periods.

The Safe Space facility, located in the walkway to The Arcadian car park, between Indi and Missoula, was funded for three months as a trial. Funding from LCP and the Police and Crime Commissioner now means that the Safe Space will remain in operation until at least January 2020.

Jo Kinsella, Arcadian Centre manager and member of the Southside BID, said: “These are heartening statistics that demonstrate that providing the Safe Space facility has been an effective way to keep people safe and sound if they run into problems. The statistics from West Midlands Police speak for themselves and we are only too keen to keep it going as we gear up for a very busy time of year.”

The Safe Space is estimated to have saved almost £27,000 in preventing A&E attendances and call outs to the ambulance service. It has also saved over £15,000 of police time.

Deputy Police and Crime Commissioner Ashley Bertie said: “I’m delighted that it has been possible to fund the Southside Safe Space for a further three months.

“Birmingham has a thriving night life which allows thousands of people to socialise, party and enjoy themselves. However, we know that sometimes people need some support and help when things don’t go to plan.

“This facility has proven its success in helping those in need as well as reducing crime.  As we approach the busy Christmas and New Year period, this service is going to be vital in continuing to keep people safe and making sure they can enjoy themselves safely.

“Since it has been in operation the Safe Space has reduced crime as well as prevented many costly trips to hospital and even prevented the loss of someone’s life. It is protecting people from harm and saving money on the cost of ambulance and police callouts.”

West Midlands Police Superintendent Ian Green said: “We manage the symptoms when people’s nights are affected through excessive alcohol or misuse of drugs and the vulnerabilities this can cause to them and others. This amazing work has helped divert those vulnerable people to a safe space where they can receive treatment and be monitored by health professionals.

“It allows the police and ambulance services to focus on more pressing, emergency issues. Having personally attended I am really impressed by the staff from St Johns Ambulance, the Arcadian and Southside BID for their compassion and professionalism and the huge impact this has had on reducing demand on their colleagues.”

Julia Robinson, manager at Southside Bid, said: “We have helped to fund the Safe Space since its inception and we have received an overwhelmingly positive response. Southside is the entertainment hub of Birmingham, and here at the BID we aim to create a safe, enjoyable and inclusive environment. It’s encouraging to see an initiative which offers visitors a place to go if they require help or medical assistance, whilst also easing pressure on the emergency services, so we’re proud to continue to help with funding.”