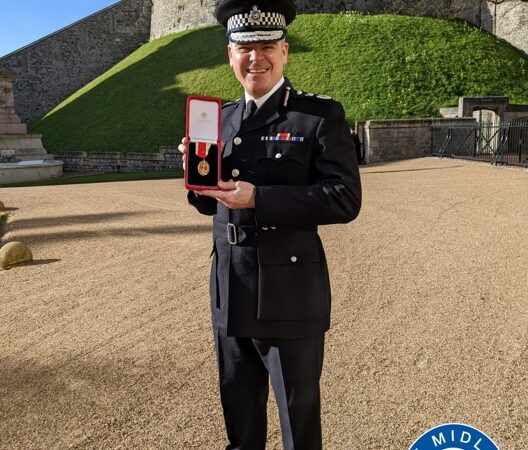 Mr Thompson was named in the New Year Honours 2021 in recognition of his services to policing over a 30-year career spanning Greater Manchester Police (GMP) and West Midlands Police.

The 53-year-old father-of-two – who joined our force in 2010 as Deputy Chief Constable before taking the top job six years later – said he was “genuinely humbled” to have been honoured.

After news of the honour was announced, Mr Thompson said: “When I saw the nomination I thought about my grandparents and the lives and opportunities they had. Were they alive they would struggle to imagine that a member of their family only two generations on could have been awarded this honour.

“This has been possible because of the support of my family, specifically my parents, my wife and our children. Like any police family Carole and my girls have made sacrifices for policing.

“It has also been possible because of policing and the people in it. I owe policing everything.”

The Chief Constable last week announced that he would be stepping down from the role later this year, after the Commonwealth Games. The search for his replacement began this week.

The West Midlands Police and Crime Commissioner Simon Foster, said: “I’m delighted Sir Dave Thompson’s hard work and achievements in policing have been recognised by the Palace with a Knighthood.

“Running the largest police force outside of London, Sir Dave has one of the toughest jobs in the country and his experience and leadership has been invaluable.

“He fully deserves the credit and recognition being given.”