Assistant PCC goes back to school 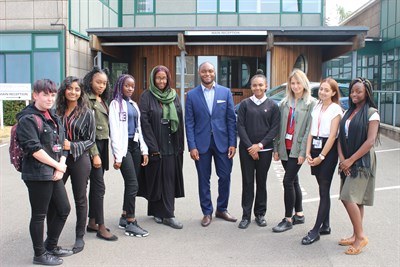 The 26-year-old returned to Great Barr Academy to deliver an inspirational speech to an assembly of students.

Ashley, who was Head Boy during his time at the Aldridge Road school, spoke about his passion for making a positive difference to the lives of people in the West Midlands, and presented on key areas of his work including supporting young people, tackling gangs and violence and  Stop and Search.

“It’s a strange feeling coming back to the school were it all started. Coming back at this point in my career is timely. I have been able to share my own experiences and offer advice to the students about their own career paths.

“It was also a great opportunity to talk to students about the dangers of carrying and using knives. Knife crime is on the rise in the region and this is one of the ways we are tackling the issue. I would urge anyone who possesses a knife to dispose of it in one of our Weapons Surrender Bins. Ditching knives saves lives.”

The talk provided the perfect opportunity  continue the ‘ Big Conversation’ with students on knife crime.

Following on from the launch at Holyhead School, the Police and Crime Commissioner and Chief Constable have an ambition for every pupil in the West Midlands to be told about the dangers of carrying knives before they break up for the summer holidays.

The aim is for students to become ambassadors and carry the message to other students including these key messages:

-Those that carry a knife are more likely to have it used against them.

-You can get a criminal record for carrying a knife and up to 4 years in prison.

-Carrying or using a knife can ruin your life chances and have a huge emotional impact on your family as well as yourself.

-There is no safe place to stab someone. Every stab wound can be fatal and the consequences of non-fatal stab wounds are just as severe.

Students at Great Barr Academy spoke afterwards about how it increased their understanding about the impact of carrying knives.