Each year over 3,000 people in the region are deliberately targeted by crooks and louts just because of who they are, and the police believe it’s the “tip of the iceberg”.

And with research to show that minor offences can quickly escalate into serious crimes if unreported, West Midlands Police is encouraging people to speak out.

As part of National Hate Crime Awareness week which launched on Saturday (10 October) officers and staff from across the force are hosting a range of events to help people recognise the signs of hate crime and offering advice on how to report offences. The move also demonstrates to would-be offenders that such behaviour is unacceptable and won’t go unpunished.

The popular eatery is managed by Halas Homes which supports disabled people and provides training and employment for service users.

“West Midlands Police takes hate crime incredibly seriously. If you are a victim of hate crime or a witness to it, I would urge you to report it, safe in the knowledge that it will be handled sensitively and taken seriously.

“People can report incidents of hate crime directly to the police or via the many different groups who provide specific support to the victims of these crimes.

“People shouldn’t have to put up with crime full stop, but especially if that crime is because of who they are as a person or their beliefs.

“Hate crimes are horrible experiences for the victims. Investigating those crimes and bringing the perpetrators to justice is a priority of the police.” 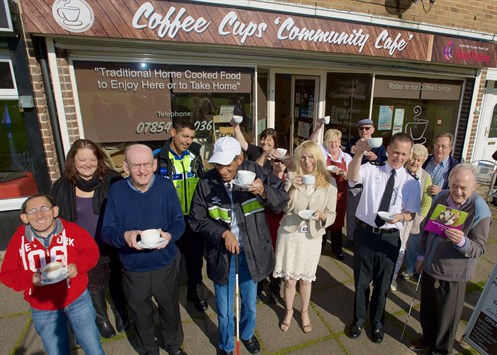 “In fact all of the evidence − including that from the gay rights group Stonewall – suggests that where an offender’s behaviour isn’t challenged early on, minor offences can escalate into major violent crimes.”

“We want to talk to as many people as possible and tell them that they’re not ‘bothering us’ if they speak out, they will be believed, they will be supported and they will be treated with dignity and respect. These are the most common reasons people give for not reporting hate crimes.”

For more information on hate crime including safety tips and an online reporting form visit: www.report-it.org.uk