APCC Dr  Lynnette Kelly has said she was deeply moved by the sight of a graveyard for victims of a genocide in and around  the town of Srebrenica  Bosnia-Herzegovina.

Dr Kelly recently returned from an educational trip to Bosnia-Herzegovina organised by the charity Remember Srebrenica. As part of a group of 15 from all over the UK, Lynnette visited the town of Srebrenica, where the crime of genocide was committed in July 1995. Thousands of people were murdered, despite the area being  deemed a ‘safe area’ by the United Nations.  Dutch peacekeepers who were based there failed to protect the people sheltering in Srebrenica.

The graveyard contains the bodies of over 6,000 people whose remains have been identified. Many people’s bodies have never been found, and in the city of Tuzla the Naming Project holds body parts that have not been identified yet.

Dr Kelly said: “I knew the genocide had taken place, as I remember watching stories about the war in Bosnia on the news. Later, I remember seeing reports on the trial at the Hague, and the declaration that what took place in Srebrenica was not just war, it was genocide. But nothing can prepare you for the sight of row upon row of identical headstones, going on and on into the distance. And it was heartbreaking to see the grave of a man, and realise that lying next to him were his two sons, his brother, and his father. Sometimes whole families were wiped out.

Bosnia seemed to slide into war and genocide so quickly. We must never forget what happened here. But also we must learn the lesson from here, that creating division in society is dangerous, and the step from casual racism to genocide actually isn’t that big. Seeing the graveyard here, learning more about the genocide, and learning more about the war that took place here, has affected me deeply. I am determined to learn the lessons, to always remember Srebrenica, and to challenge racism in our society. ” 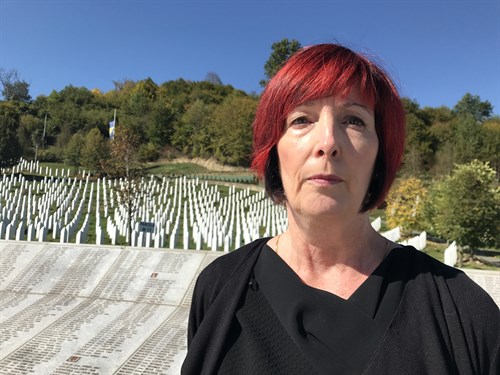 Picture : APCC Dr Lynnette Kelly at the graveyard for victims of the genocide, Srebrenica, Bosnia Herzegovina.