The Assistant Police and Crime Commissioner Ashley Bertie spent Friday morning at a Birmingham school re-examining the on-going work being carried out to educate young people on the dangers of gun and knife crime.

Mr Bertie’s visit follows an increase in violent crime in the West Midlands. 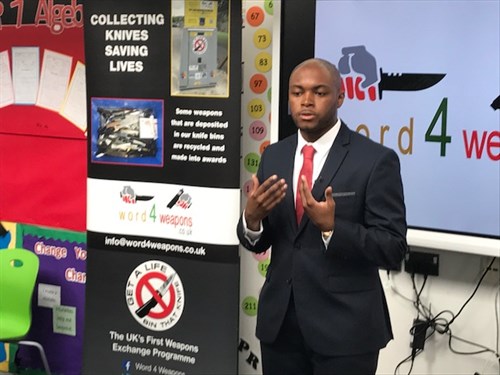 Educational programmes of this sort have been funded by the Police and Crime Commissioner since being elected. The sessions see experts, as well as former perpetrators and victims of knife crime, talk to young people about the dangers posed by carrying weapons.

Educational sessions for children take place every day of the school calendar across the West Midlands.

Friday’s session is run by the organisation Word 4 Weapons. During the workshop former police officer turned weapons campaigner Michael Smith spoke to year 9 children about the dangers of knife and gun crime. Students at Holte School in Lozells also viewed a short film which will raise awareness of the dangers they face from knives and guns.

Assistant Police and Crime Commissioner, Ashley Bertie, said: “I was keen to visit the school workshops to re-examine the good work being carried out right across the West Midlands to ensure young people do not put themselves and others in danger.

“I have recently been concerned by an increase in violent crime and I want to take a close look at what more can be done to make sure our children are safe.

“Educational work at schools, which focuses on gun and knife crime, is vital if we are going to make sure young people make the right choices.”

The West Midlands Police and Crime Commissioner, David Jamieson, said: “A decision by a young person to carry a weapon can lead to horrific circumstances. It is vital we warn children at a young age of the dangers they face from carrying knives or guns and stress they have a choice to make.  It is because this work is so important that I have consistently funded educational programmes of the sort taking place at Holte School today.”