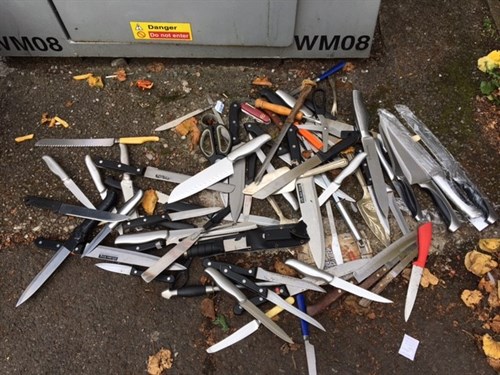 More than 140 weapons, including axes, swords and survival knives, have been recovered from surrender bins in Birmingham and the Black Country.

Supported by West Midlands Police and Crime Commissioner and provided by Word 4 Weapons, the bins give people the chance to dispose of weapons safely.

During the latest round of collections, the bin in Dunstall Road, Whitmore Reans, Wolverhampton, had the highest number of blades – 54.

This was followed by the bin at the old Tesco site in Five Ways, Birmingham, which had 29 knives.

Birmingham’s Stratford Road bin had 25 weapons, including double-bladed knives, while Lozells Road had 18 blades, plus a ‘zombie knife’.

The bin in Heath Town, Wolverhampton, had eight knives, as well as three swords, while George Street, West Hockley, had two knives and one axe.

Goosemore Lane, Erdington, and Tesco, Aston, both had one blade each.

West Midlands Police and Crime Commissioner David Jamieson said: “These bins are only successful if the community supports them and I would like to thank everyone who deposited a weapon for doing the responsible thing.

“It gives me great satisfaction that there are now scores of potentially deadly weapons off our streets.”

Word 4 Weapons founder Mike Smith MBE added: “We at Word 4 Weapons are delighted with the results produced from the knife bins to date.  We encourage the public to continue to use them and spread the word of their existence.

“We are sure, based on these results, that many lives have been saved.  We are pleased to continue giving our full support to the West Midlands PCC weapons reduction initiative.”

The full list of weapon surrender bin contents is as follows: 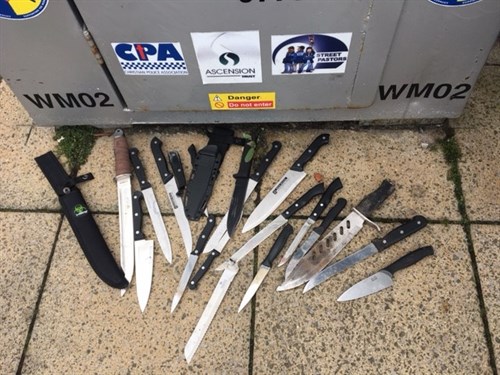