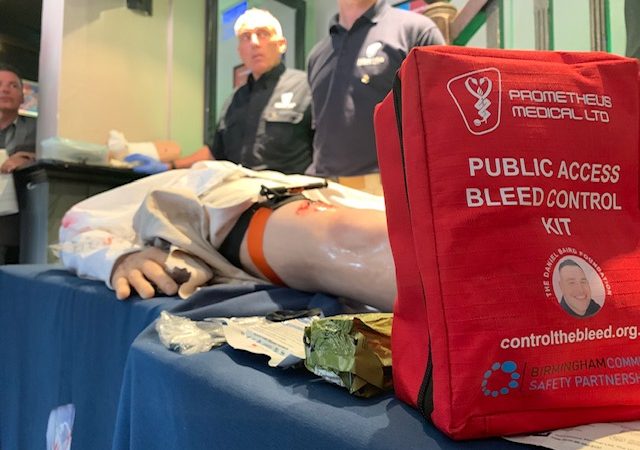 Lynne Baird runs The Daniel Baird Foundation, in memory of her son who was fatally stabbed while out with friends in Birmingham on 8 July 2017. There was no first aid or Bleed Control Kit available, and Daniel died shortly after arriving at hospital due to catastrophic bleeding.

Lynne Baird has been working with the West Midlands Ambulance Service, Birmingham City Council, Birmingham Community Safety Partnership, West Midlands Trauma Networks and the PCC is pleased to have been able to buy the 50 Bleed Kits at cost of a £4,000.

The kits will be distributed to various businesses and late night venues – including The Village in Hurst St where the launch took place.

Staff at venues will receive training on these kits, and people who call 999 will be directed to the nearest kit and talked through how to use it by West Midlands Ambulance Service call centre Trauma Team.

The kits were developed and produced by Prometheus Medical.

On average it takes an ambulance responding to a 999 call from someone with life-threatening illnesses or injuries seven minutes to reach a patient, but bleeding from serious injuries – such as those suffered in a stabbing, shooting, car or industrial accident – can prove fatal in as little as three to five minutes. These Bleed Control Kits can help save vital minutes until paramedics arrive at the scene.

David Jamieson, West Midlands Police and Crime Commissioner, who funded the initial rollout of these kits, said: “Lynne Baird has done a fantastic job campaigning so passionately for the small life-saving packs to be rolled out across Birmingham. Lynne’s hard work means that Birmingham is now set to become the first ‘Control the Bleed’ city in the UK. A scheme which I hope will be adopted across the West Midlands. They are relatively inexpensive and if they help just one person they will have proved a resounding success.  Lynne’s efforts are to be admired and I’m delighted to have been able to help, even in just a small way.”

Anthony Marsh, Chief Executive of West Midlands Ambulance Service, said: “In cases such as Daniel’s, every second counts and being able to stem the bleeding could make the difference between life and death.  We very much welcome the campaign to get bleed control kits initially in Birmingham city centre but hope that the work of the Daniel Baird Foundation will result in kits becoming as common as defibrillators are so that many more lives can be saved right across our country.”

Cllr John Cotton, Cabinet Member for Social Inclusion, Community Safety and Equalities at Birmingham City Council, said: “The launch of these kits in our city shows what we can all achieve when everyone works together, we can really make a difference. Being able to put something in place that can save vital minutes in such situations and hopefully help save lives is a great example of that.”

Lynne Baird, Daniel’s mother and founder of The Daniel Baird Foundation, added: “I am delighted that Birmingham, his home, is taking this step to become the first Control the Bleed city in the UK and that Birmingham Community Safety Partnership are helping achieve this. I think he would have been very proud of this initiative.”

Supt Ian Green of West Midlands Police, who chairs Birmingham Community Safety Partnership, added: This is a massive pilot for us in terms of officers being able to deliver first aid at the scene using these kits.  Having the right kit, approved by West Midlands Ambulance Service is great, as paramedics can talk us through how to use it. I hope we don’t have to use these kits but I think this will genuinely save lives”.

Julia Robinson, Southside BID manager, said: “Here at Southside BID, we want to proactively work with all authorities to bring about change in our community. Having Bleed Control Kits to hand in our businesses will help to achieve that change, and could save a life one day”.