Bleed Control Kits rolled out across the West Midlands 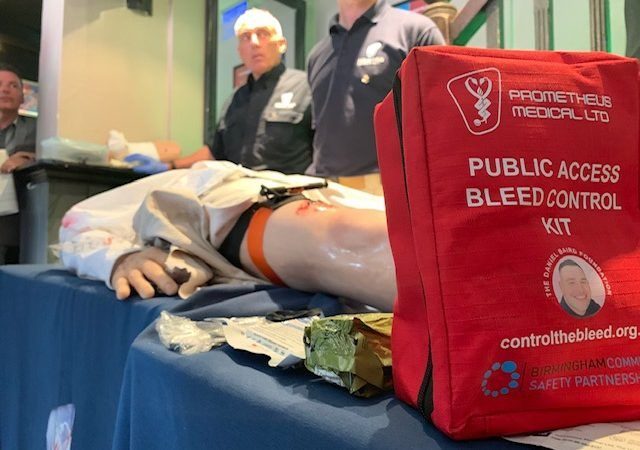 The West Midlands Police and Crime Commissioner has put in place funding to expand the initiative to have 400 Bleed Control Kits distributed across the region.

David Jamieson has provided funding to ensure that these life-saving packs are made available in towns and cities across the whole of the West Midlands.

The kits will be made available at key locations in Birmingham, Wolverhampton, Walsall, Dudley, Sandwell, Solihull and Coventry.

The Birmingham pilot was successfully launched by the Community Safety Partnership in June this year, and was able to purchase 50 kits to be installed in various location in the city centre, following funding from the Police and Crime Commissioner.

Bleed Control Kits have also started to be installed in Dudley, following work by the Police and Crime Commissioner and local Councillor, Kieran Casey.

Lynne runs The Daniel Baird Foundation in memory of her son who was fatally stabbed in Birmingham on 8th July 2017.

Daniel Baird was just 26 when he died of catastrophic bleeding, shortly after arriving to hospital. The Daniel Baird Foundation was set up following Daniel’s death and campaigns for public access to Bleed Control Kits in areas which are vulnerable to violent crime.

Violent crime has been rising across the West Midlands. Police Statistics show an increase in knife crime of 85% since 2012.

Last year, the force recorded 3,210 offences involving a knife. 50 of these offences resulted in a death.

On average, it takes an ambulance seven minutes to reach a patient. But bleeding from serious injuries – such as those suffered in a stabbing, shooting, car or industrial accident – can prove fatal in as little as three minutes.

A Bleed Control Kit can help save precious time until paramedics arrive at the scene and prevent catastrophic bleeding from leading to a fatality.

The West Midlands Police and Crime Commissioner David Jamieson said: “Lynne Baird has done an outstanding job campaigning so passionately for the distribution of Bleed Control Kits across Birmingham and Dudley.

“I am delighted to announce that these small-life saving packs will now be available across the whole of the West Midlands.

“Violent crime has been rising across the country and here in the West Midlands we are not immune. We’ve seen a dramatic increase in knife crime, rising from 1,566 incidents in 2012 to 2,900 in 2018.

“If the roll out of these kits can help just one person, they will have proved a resounding success.”

Lynne Baird from The Daniel Baird Foundation added: “I would like to pass on my thanks to the Police and Crime Commissioner, Community Safety Partnership, Police and all those involved for the roll out of Bleed Control Kits across the West Midlands.

“This is a fantastic achievement for The Daniel Baird Foundation and hopefully, other regions will follow our wonderful example!”

West Midlands Police and local Community Safety Partnerships will be helping to facilitate this roll out, which is expected to cost around £38,000.