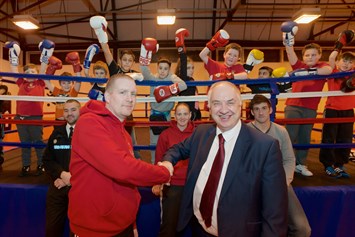 O’Dells Community Amateur Boxing Club, in Birmingham’s Bromford and Firs Estate, has been nominated for an award at the West Midlands Outstanding Citizens’ Awards.

The boxing club, founded 4 years ago, has played an important role in curbing anti-social behaviour in the local area. Volunteer coaches train children, teenagers and adults at the facility that two years ago was awarded funding to expand using money seized from criminals.

O’Dells is run by Craig and Tina O’Dell. During the nomination process, their efforts have been described as ‘truly inspiration’. The club has been nominated for the Outstanding Community Project Award 2017.

“The club is somewhere for the young people on the Bromford and Firs Estate to come to help in forming a really positive outlook for their lives. We’ve been able to put the grant that we secured from the Police and Crime Commissioner’s fund to good use to get more young people along, especially those who perhaps couldn’t afford to come previously. It’s great that our club is being recognised with this nomination.”

“It’s great to see that O’Dells Community Amateur Boxing Club is going from strength to strength. This awards ceremony is our chance to recognise the civic duties of people like Craige and Tina, and the great work that they’re doing for young people on the Bromford and Firs Estate.”

In 2015 O’Dells Community Amateur Boxing Club was awarded £11,260 by the West Midlands Police and Crime Commissioner from Proceeds of Crime Act (POCA) funding to enable the centre to offer more services, offer longer opening hours and expand the boxing gym.