Boxing club that turns children's lives around up for PCC award 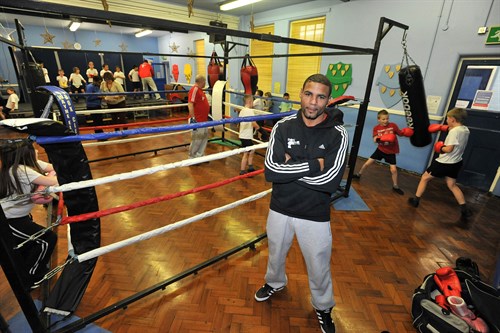 A boxing club run by former World Champion Wayne Elcock has been nominated for a Police and Crime Commissioner’s Outstanding Citizens award.

Box Clever, based at Solihull’s St Andrew’s Centre, has turned hundreds of children’s lives around, reduced crime and boosted fitness, self-esteem and community-relations.

The scheme has been nominated for the PCC’s Outstanding Community Project award, the winners of which will be announced at a ceremony on July 13 at The REP in Birmingham.

Wayne, who is a former English, British, Commonwealth and WBU World Boxing champion, initially intended to run the scheme, which has strong links to the local council and police, for just 12 weeks but it proved so popular it is still going four years later.

The 42-year-old said: “Boxing 100 per cent turned my life around. It gave me focus, vision and positivity and kept me away from people and things I shouldn’t be near.

“It’s hard to find role models on the city streets: very often the role models are people kids should not be aspiring to. But boxing coaches can guide young people away from that life. As soon as I stepped in the gym, I knew it was for me and the buzz was second to none. This is about proper recognition, not street recognition.

“My main objective is to mentor and train the kids and turn their lives around. It’s not about making champions in sport but in life. It’s all about self-confidence, discipline and esteem. It’s about instilling them with an inner individual drive.

“When I was boxing in London people would say ‘he’s forgotten about us’. But I knew the more titles I won, the more I could put Birmingham on the map and come back and help. I grew up in Shard End with no money and no hope and the kids can see that I’m living proof that you can turn your life around. They look at me and see what I’ve done and they get inspired. It was only supposed to be a 12-week programme but it snowballed because it was so popular. It’s great that there’s a free programme like this available in an under-privileged area that gives the kids a real platform.

“I tell the kids ‘behave at school and don’t give your parents any grief’ and it really works. The centre we’re based at now has seen a 100% reduction in crime. Before, its windows were smashed and there was drug paraphernalia about but that’s all changed now. We have 400 kids every week. There are now 36 amateur boxers at the club and 27 came through the programme. There is also one national champion in there. It’s moving along in the right direction and it’s a dream come true.”

Wayne said he was ‘thrilled and delighted’ to be nominated for the PCC’s award.

West Midlands Police and Crime Commissioner David  Jamieson said: “The awards are our chance to say ‘thank you’ to those people who make the West Midlands a better place.

“Wayne’s non-contact boxing club is a perfect example of what a bit of community spirit, hard graft and discipline can achieve. He and his boxers are a credit to our region.”