Bus driver up for award after saving suicidal pedestrian 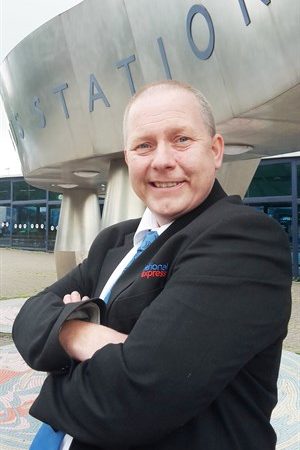 A courageous bus driver who narrowly avoided colliding with a suicidal man has been nominated for a prestigious award.

Garry Williams from Tipton, a driver with National Express for over 3 years, was going about his normal routine as he drove the number 5 bus along a busy dual carriageway on the way to West Bromwich.

As Garry approached a bus-stop he noticed a man standing in the road up ahead. He was acting strangely and looked distressed. Moments later he tried to throw himself under Garry’s bus.

Thankfully the quick-thinking bus driver swerved and managed to narrowly avoid the man.

But as Garry pulled over to the side of the road he noticed the man had got up and was trying to throw himself in front of another vehicle.

At that point Garry noticed he was wearing a hospital wristband and heart monitor. It was clear he was unwell.  Recognising the man needed treatment, Garry loaded him on to his bus and took him to a nearby hospital.

“He went above and beyond his duty to avoid a serious incident and put the safety of others before himself. I think Garry is a credit to the National Express team, and a testament to the sense of community and selflessness evident in the West Midlands. Garry is a hero.”

Speaking about the terrifying event, Garry Williams said: “Human lives matter and I am glad that I was able to help the gentleman in a small way.

“I am also thankful my actions prevented other drivers from being traumatised by the man jumping in front of their vehicle.”