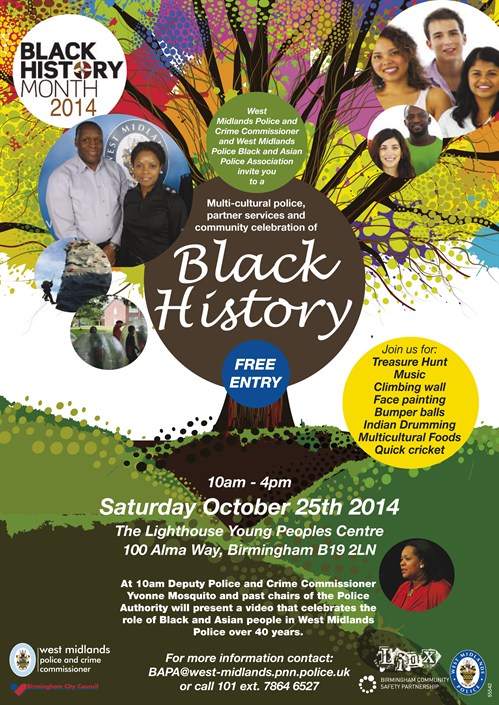 The free event, which will be held at the Lighthouse Young People’s Centre on Alma Way, Birmingham, on Saturday 25 October, 10am-4pm, will be a celebration of the contribution of the Black and Asian community to policing in the West Midlands.

The event will feature a range of activities for all the family, including music, poetry, displays and multicultural foods alongside face painting, Indian drumming, a Fire Tender, climbing wall, bumper balls and a treasure hunt.

The Deputy Police and Crime Commissioner will present a unique video celebrating the role of Black and Asian people in WMP over the last 40 years.

Yvonne Mosquito said:  “In the year that West Midlands Police is commemorating its 40th Anniversary, the Police and Crime Commissioner has been delighted to commission the making of this video which celebrates the contributions of Black and Asian people in building the police force we have today.  The video includes accounts from police officers and staff that span the whole 40 year period.  They highlight the changes people have seen and their hopes that in future, the make-up of West Midlands Police will represent the diversity of the population it serves as closely as possible.”

Members of the community are invited to come along and take part in the event. For more information, the public can contact BAPA by calling 101 or by emailing bapa@west-midlands.pnn.police.uk