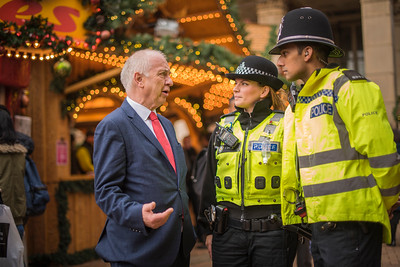 The Police and Crime Commissioner says people should feel reassured about their safety at this year’s Christmas market in Birmingham.

David Jamieson has been briefed on the security measures put in place by West Midlands Police and levels of security will be as high as ever.

The PCC says people’s safety is his, and the force’s, top priority.

As was the case last year, security barriers are in place as a precaution. Police officers armed with tasers will also be on patrol.

Throughout the year armed officers are stationed in the city centre ready to respond to an incident. This will be no different over the 2018 festive period.

In 2017 crime at the Birmingham Christmas market was very low meaning millions of people from around the country came to the second city and enjoyed the food, drink and shopping on offer.

The Frankfurt themed event – which runs from Thursday, November 15th to Sunday, December 23rd – is thought to be worth hundreds of millions of pounds to the local economy.

The West Midlands Police and Crime Commissioner, David Jamieson, said: “The Christmas market is one of Birmingham’s finest attractions during the year, drawing millions of people to the city.

“West Midlands Police, like all other forces around the country, remain vigilant in the face of the current terror threat.

“I’m pleased to say security precautions are in place again this year and I hope everybody who plans to visit the market feels reassured that their safety is our main concern.”