The ceremony included a celebration of Bob’s life including speeches from those who knew him as the West Midlands Police and Crime Commissioner, a local councillor and a member of his community. Local residents who regularly use the Community Hub were also on hand to provide a wide range of entertainment, including bagpipes and a local dance group.

At the end of the ceremony a plaque commemorating Bob was unveiled by the Deputy Police and Crime Commissioner and several members of Bob’s family including his widow Sarah. 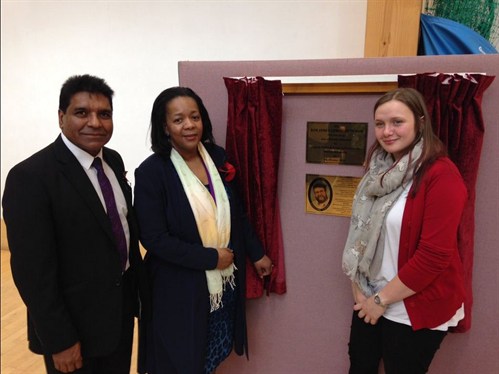 Bob was the first Police and Crime Commissioner for the West Midlands, elected on November 15 2012 and served in the role until his untimely death on July 1 2014.

He was born and bred in Wolverhampton and he never lived more than a mile from where he was born, except when studying for his degree in Nottingham (BA (Hons) Public Administration).

Bob served as a Labour Councillor from 1980 to 2013 for Blakenhall in Wolverhampton.  He held responsibilities as Chair of Education, Finance, and Youth Committees plus many others as Wolverhampton City Councillor, including chairing Wolverhampton Community Safety Partnership.

“Bob was a dear friend and an excellent public servant. His commitment to policing and helping those in need was remarkable.

“He wasn’t just a friend but a mentor as well. One of things that made Bob one of a kind was how generous he was with his time. No task was too large, complex or difficult. He was a man of great principles, but crucially a great listener too. He never lost touch with the people he sought to serve.”