Community heroes from across the West Midlands were honoured in the Police and Crime Commissioner’s Outstanding Citizens Awards last night. 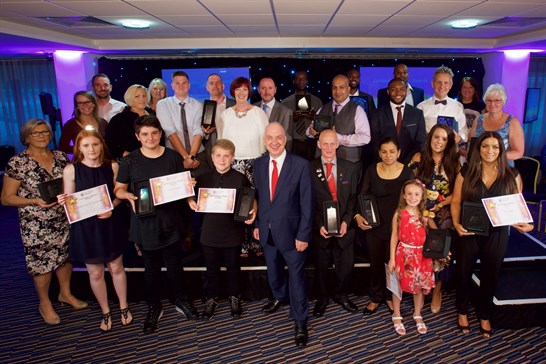 The evening’s ceremony began with the Active Citizens’ Fund Award. This is recognition of how organisations used money given to it by the Police and Crime Commissioner. The Diamond Academy, which provides football coaching for children in Handsworth, walked away with the first gong of the night.

Meanwhile, one of the biggest awards – the Outstanding Act of Good Citizenship – went to bus driver Desmond Johnson, who helped save the life of a boy who was hit by another vehicle on Coleshill road. Keeping him conscious until the air ambulance arrived was a critical act in helping the youngster as he fought for his life.

Elsewhere, the Outstanding Citizen Award went to a recently bereaved mother who lost her 12 year old son in 2015. He wasn’t wearing a seatbelt when he was thrown from a car and killed. Ever since, Sukhi Atwal, has campaigned to promote the use of seatbelts. On hearing about the award Sukhi said, “I’m doing this for Amar and to ensure that no other family has to suffer the loss that we have.”

Outstanding Young Citizen went to Dudley teenagers Louis Price and Jack Goodman. The pair helped guide the emergency services to a vulnerable person who had gone missing.  Louis Price, who was 13 at the time of the incident, described how he was feeling, “We’ve told quite a few of our friends at school. We’re proud of what we did, but we’re proud for our families too”.

Outstanding Community Project was awarded to O’Dells Community Amateur Boxing Club in Birmingham’s Bromford and Firs estate. Founded 4 years ago it has helped curb anti-social behaviour in the local area. Craig O’Dell, who runs the club, spoke about receiving this recognition, “We’ve been able to put the grant that we secured from the Police and Crime Commissioner’s fund to good use to get more young people along, especially those who perhaps couldn’t afford to come previously. It’s great that our club is being recognised”

Clive Knowles, who has helped police forces tackle knife crime by providing weapons bins for surrenders, was thanked personally for all he has done and handed the Special Recognition Award.

Long-serving custody visitor volunteers were also honoured at the event for their vital public service in ensuring those in police cells are being treated correctly.

The heart-warming awards ceremony was held on July 6th at Edgbaston Cricket Club  in Birmingham.

Mr Jamieson said: “It was a truly inspirational evening.

“It’s a pleasure to meet these local ‘heroes’. All the nominees and winners have incredible stories to tell. I’d like to offer my sincere congratulations and thanks to all – they are a true credit to the West Midlands.”

There were a number of runners-up on the night.

The Sandwell Crime Prevention Panel and the Albion Foundation were runners up in the Active Citizens Fund category.  Gro-organic’s, CEO and Founder, Sarah Gill and The West Midlands Road Casualty Reduction Team came second in the Outstanding Community Project Category.