West Midlands Assistant Police and Crime Commissioner, Dr Lynnette Kelly, has welcomed the support of Geoffrey Robinson MP in the ongoing campaign to install a weapon surrender bin in Coventry.

There are currently 12 bins across the region in Birmingham, Sandwell and Wolverhampton, but none in Coventry. 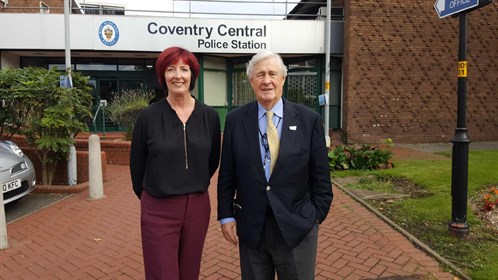 Dr Lynnette Kelly said: “I thank Geoffrey for his support in this part of the ongoing campaign to tackle the issue of knife crime.

“It is a well-known fact that those who carry knives are much more likely to have them used against them and be a victim of knife related crime than those who don’t, there is nothing smart or cool about carrying a weapon.

“These bins are most successful when the community is behind them and I’m glad that Geoffrey Robinson MP has pledged his support.

“We currently have knife bins in place in Birmingham, Sandwell and Wolverhampton that have proved very successful in getting knives off the streets and I hope Coventry is able to join them soon.”

The knife bins currently in use across the West Midlands have helped with getting hundreds of weapons, including some firearms, off the streets. The latest haul can be found here.

Geoffrey Robinson MP said: “There were 231 incidents of knife crime in Coventry last year, which was an increase of 25% on the previous year’s figures. We need a joined-up, uniform approach to educate young people on weapons on the streets in Coventry, and I welcome the West Midlands Police and Crime Commissioner’s latest initiative to tackle the increase in knife crime here in Coventry.”