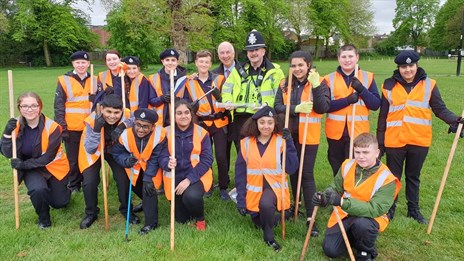 A unit of Police Cadets from Coventry have conducted a knife sweep in Edgewick Park as part of the ongoing effort by the police to combat knife crime.

It comes as the Knife Angel leaves Coventry and heads onto Birmingham.

The high visibility operation conducted by the Cadets is part of the ongoing effort by West Midlands Police to tackle knife crime.

The sweep, conducted by the Cadets under close supervision by local police officers from Foleshill Neighbourhood Team, entailed the unit searching the park for knives and other weapons which may have been stashed or discarded in the area.

The young people will not handle any knife or dangerous item they find.

Commenting on the first park sweep conducted by West Midlands Police Cadets, the Police and Crime Commissioner David Jamieson said: “It is excellent to see our cadets getting stuck into tackling knife crime in Coventry.

“When I re-introduced Police Cadets back to the West Midlands the intention was to always have them out in their communities and making a difference.

“Tackling knife crime is the top priority for the police at the moment and having the additional assistance from the Cadets to get weapons off the streets and in the possession of the police where they can no longer cause harm is what the scheme is all about.

“This is young people taking a stand and sending a message: that knife crime won’t be tolerated in the West Midlands.

“We now have over 200 cadets in the West Midlands who are playing their part in tackling crime in their communities and learning new skills.”

He added: “The Knife Angel, as it leaves Coventry and moves onto Birmingham, is already leaving an impact on the city.

“The angel has turned symbols of violence into a symbol of peace.

“It has been able to refocus the attention on knife crime and I am pleased that the Cadets are playing their part in tackling violent crime.”

Chief Superintendent Mike O’Hara, commander of Coventry Neighbourhood Police Unit, said: “Knife crime has a devastating impact on families and communities, so to see our young cadets getting involved in such a way is really heartening.

“The event helps to raise their awareness and understanding of what knife crime really means, while it serves as a reminder to others that carrying a knife is both dangerous and illegal. We need to drive out that culture of people feeling comfortable carrying knives or feel the need to carry knives for their protection.”

The Foleshill Policing Team have had recent success in recovering weapons from Edgewick Park are now ensuring that the local cadets unit is involved.