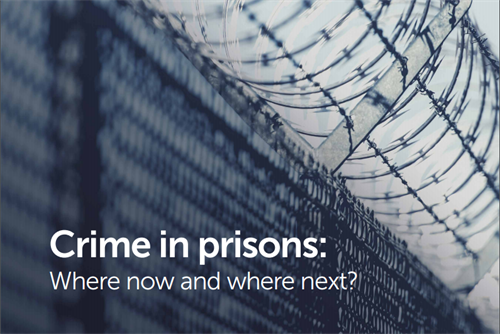 Police and Crime Commissioners in the West Midlands region are presenting a report to Government, following a six-month study into organised crime in prisons.

‘Crime in prisons: where now and where next?’ was commissioned by Police and Crime Commissioners from the West Midlands, Staffordshire, Warwickshire and West Mercia.

Prisons are profitable marketplaces, encouraging the widespread presence of drugs and allowing criminals to manage organised crime gangs from behind bars.

The study identified key issues within the prison system including the widespread presence of drugs and the ability to manage organised crime from behind bars.

Professor James Treadwell from Staffordshire University and Dr Kate Gooch from the University of Leicester, were appointed to carry out this in-depth research and present solutions on how to tackle rising crime in the prison system.

Over a six-month period, they spoke to prisoners, prison governors, staff and multiple agencies throughout the West Midlands region.

This multi-agency approach led to the development of a five key recommendations to address the deep-rooted problems which currently exist in the West Midlands prison system.

The findings of the study show how better information sharing between organisations has a significant impact on tackling criminality behind bars.

An information sharing pilot, trialled at HMP Dovegate* in Staffordshire, exposed prison staff who had links with organised crime groups and visitors who were trafficking drugs into the prison.

A key recommendation of the report is the increased information sharing between the Police and the prison service, including allowing prisons access to the National Police Database.

The West Midlands Police and Crime Commissioner, David Jamieson said:  “I welcome this report on the pressing issue of organised crime in prisons.

“We can only tackle this issue by working together. Criminality in prisons impacts all agencies, the local community and it impacts on vulnerable people.

“I encourage Government to acknowledge the good work which has taken place in the West Midlands and recommend this approach is adopted nationally, to tackle criminality behind bars”.

The key recommendations of the report focus on five areas including:

The recommendations will be carried out by a working group, involving key organisations in the West Midlands.

For further details on the five-point plan and to read the full report, please click here.

* Dovegate identified a woman visitor as a drugs trafficker, who was visiting numerous inmates and was then banned.  A member of staff was also identified as having links to organised crime and had previously been arrested for conspiracy in relation to crack cocaine. She has since been dismissed.