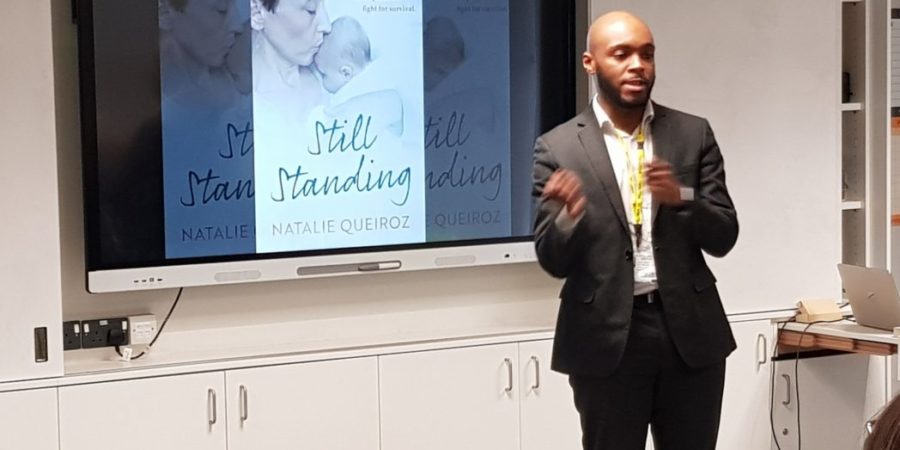 The Deputy West Midlands Police and Crime Commissioner Ashley Bertie, joined youngsters from Our Lady & St Chad Catholic Academy in Wolverhampton, for a unique opportunity to learn at first-hand how terrible and emotionally physically and mentally crippling a knife attack can be.

Natalie Queiroz was stabbed 24 times in March 2016, whilst she was 8 months pregnant by her partner in a Sutton Coldfield street in broad daylight with a 12 inch carving knife in the most vicious attack imaginable, lasting 9 minutes in total. The attack came without any warning at all and Natalie was left to rebuild her life after a truly monumental life-shattering event.

Four years later, Natalie has now set up her own not-for-profit Community Interest Company, focussed on talking to young People about the reality of knife crime and positively empowering them to not carry a knife. As well as being an avid charity fundraiser, a professional motivational speaker, holder of 2 charity and community awards and the writer of a bestselling book talking about her experiences, Natalie has recently spent a lot of her time going into Wolverhampton schools to talk about her experiences to those young people who have been identified as most at risk from violent crime using knives as a weapon.

Through her Inspire 2 Quit Blades (Community Interest Company) sessions, Natalie talks about the day of her attack – the pain she went through, the aftermath and long-term damage and how, despite this horrific physical and emotional destruction, she has managed to pull her life back together to build a better, more empowered and rewarding life no matter how bad the damage.

Natalie’s Inspire 2 Quit Blades sessions for young people has been part-funded by the West Midlands Police and Crime Commissioner’s Active Citizens Fund. The Active Citizens fund is money which has been allocated from items seized from criminals under the Proceeds of Crime Act. Each year, the West Midlands Police and Crime Commissioner invites local community groups to bid for a grant from this fund. This is money must go to community projects and cannot be spent on recruiting officers.

“The purpose of the Inspire 2 Quit Blades project is to talk about the enormous damage carrying a knife can do. Facing Young People with an actual victim, they can see and hear for themselves first-hand just how horrific the injuries can be, how so many factors could mean a fatal outcome and hopefully overcome any potential desensitisation our younger generation may have to the issues of knife crime through media around them. It also empowers young people to make positive choices about their own lives, no matter what their background is and live a life without the need to carry a knife. We have to inform, educate and most importantly support our younger generation. Our Key aim is to make youngsters change their mind set about carrying a knife and to act as an ambassador to their peer groups about the true reality and shame of knife crime.”

“Natalie is truly an inspiring speaker and speaks from her unimaginable experiences which clearly has an effect on the young people she meets. I am delighted we have been able to support her work through the Active Citizens Fund with money taken from the proceeds of crime. I’m sure that not only the youngsters, but the public at large would agree that this extremely thought provoking project is well worth supporting from funds such as this.”