Organisations working to support victims from across the West Midlands region, came together to share their knowledge and expertise on forced marriage and honour based violence, as part of a new initiative organised by the Police and Crime Commissioner.

The event was organised by the Victims Commission which, as the advisory body for specialist victims’ services, provides the PCC with advice to help him decide where resources and future funding is required.

Forced marriage and honour based violence are amongst the ten key priorities identified within the PCC’s Police and Crime Plan. 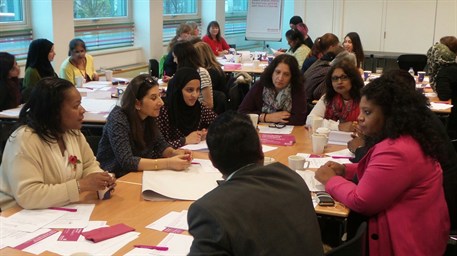 Speaking at the event, Deputy Police and Crime Commissioner, Yvonne Mosquito told delegates: “These crimes are being perpetrated now in the West Midlands resulting in perpetual fear, psychological pain and physical suffering for its victims, who are people living in our communities.

“Family relationships are destroyed, home is no longer a safe place, parents become custodians and pain can be self-inflicted as well as inflicted by others.  In addition to physical and sexual abuse, victims, very often young people, are forced into a life abroad away from everyone and everything that is familiar to them. Isolation is common to all its victims. Sadly, as we know, it can lead to suicide and murder.”

Statistics for 2014, from the national Forced Marriage Unit, show that 12 % of cases dealt with were from the West Midlands. Forced marriage and honour based violence affects males as well as females. A fifth of all cases supported by the FMU involved males and a significant number of victims also involved people with disabilities or learning difficulties. The practice is perpetrated across cultures, countries and communities. The majority of victims, however, tend to be under 40 years of age.

Yvonne Mosquito continued: “As a passionate supporter of services that improve the lives of women and their families I am delighted to chair this event that I hope will lead us to understand more about existing services for victims of forced marriage and honour based violence, understand more about where the gaps in support are and what additional support victims need to have in place, which is not currently available.”

In April 2015 the Police & Crime Commissioner took on responsibility for the new Victims’ Service which provides support and information for all victims.

Victims, particularly those of hidden crimes such as forced marriage, have complex needs and the PCC is working with other victim support agencies in the region to improve service accessibility for these very vulnerable people. Often victims are constantly chaperoned and find it difficult to ask for help whilst others, particularly those with disabilities or learning difficulties, may not even be aware that they are the victims of a forced marriage.

The Deputy PCC told delegates: “There are many stages on a victim’s journey to coping and recovering from this crime. We all have a part to play to support a victim throughout those stages. Whichever agency we work for, however brief our intervention, we need a collaborative approach. We must share our expertise to benefit all victims so that more people are empowered to access support and fewer people become victims of forced marriage and honour based violence.”