The force has today launched its annual month-long operation to stall irresponsible motorists who put their own and others’ safety at risk on the roads.

And as part of the campaign – which also sees officers targeting ‘morning after’ drunk drivers – West Midlands Police has created a 360-degree virtual reality video designed to hit home the devastating consequences of driving under the influence.

The hard-hitting video – using actors and involving all emergency services – is shot from the perspective of a passenger in a car being driven by someone over the limit. It graphically shows the after effects of a high-impact collision as one passenger suffers life-threatening injuries, another is cut free from the car and the driver is arrested.

The VR headsets, funded by West Midlands Police & Crime Commissioner David Jamieson, are being taken to shopping centres and prominent locations across the festive period to show people the consequences of driving while drunk.

PCC David Jamieson, who is backing the campaign, said: “People driving under the influence of drink or drugs are a menace on our roads. They put their own and other people’s lives at risk. 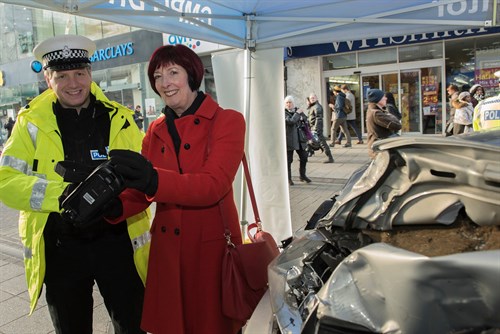 Inspector Jack Boardman, who is leading the WMP and Central Motorway Police (CMPG) drink and drug drive operation, added: “Getting behind the wheel under the influence of drink or drugs can put yourself and other innocent road users at risk of serious injury or death.

“The festive season is a time of the year where people want to go out and celebrate but everyone needs to be responsible and plan their journeys. It is the same the next morning where you can still be under the influence and breaking the law.

“This innovative technology really helps to hit home the dangers of drink -driving; it is very realistic and shows the scenes we unfortunately face following a serious accident.

“We don’t take the decision to use these headsets lightly; we appreciate there are some parts of the scenario which may be distressing. But we feel it is important to illustrate the consequences of illegal behaviour.”

As part of the intelligence-led police operation throughout December, officers will be carrying out unmarked patrols and monitoring hotspot areas.

“Drinking alcohol then driving is the most dangerous thing a driver can do and is a serious criminal offence.

“I’ve seen first-hand the damage drink and drug driving can have, that is why I have invested in these headsets to show the dangers to the public too.

“The overwhelming majority of law-abiding motorists are appalled at drink driving and will back this hard hitting campaign.

“I want everyone to enjoy the festive season – but if people want a drink , then don’t combine it with driving.”

*The video has been created with the support of colleagues from West Midlands Fire Service and West Midlands Ambulance Service. Thanks also to the NEC for their assistance in the filming.