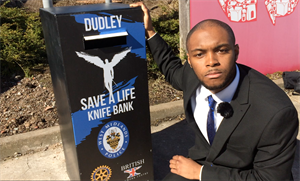 Dudley is the latest place to have a new weapon surrender bin fitted in the West Midlands Force area.

The new safe and secure container, which is designed for people to safely dispose of knives, was officially opened today at Tesco, Town Gate Retail Park, Birmingham Rd, Dudley.

The other 13 bins are based across Birmingham, Wolverhampton and West Bromwich. More are expected to be fitted in the coming months across the West Midland force area.

Commenting on the arrival of the new bin, which is Dudley’s first, Assistant West Midlands Police and Crime Commissioner, Ashley Bertie said: “This is a great step in reducing the number of people carrying knives in the West Midlands.

Carrying a knife, not only poses a danger to others, but also to yourself. These bins are providing people with a legal and safe way to dispose of knives which they shouldn’t be carrying. Every knife posted into a surrender bin is potentially a life saved.

Only last week we opened a new weapon surrender bin in Wolverhampton. I’m deiighted that 10 days later we have been able to fit a new one in Dudley too.

These bins work best when the community wants them and that’s certainly the message we have certainly recieved in Dudley.” 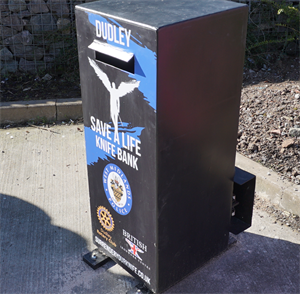 Peter marsh from the Dudley Rotary Club, who helped organise the installation of the new knife bin said: “The knife bins are a fantastic idea. As soon as i heard about them i knew Dudley should have one too.

We all know there is a problem across the country with knife crime and these bins are a very useful tool to help tackle it.

If anyone in Dudley has a knife which they shouldnt, i’d urge them to use the bin.

The PCC is calling on anyone who would like a knife bin in their area to get in touch with his office.”

The 14 knife bin locations across the West Midlands are: