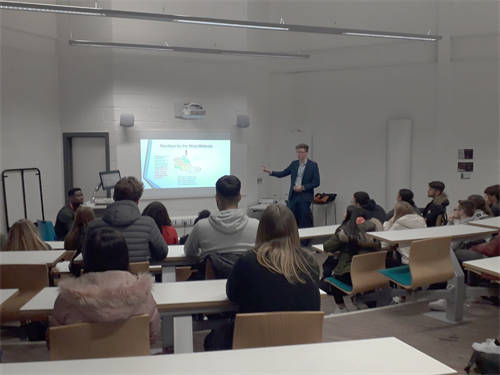 Two teenagers from Dudley are taking a stand against knife crime with their new ‘Sharpen Minds Not Knives’ campaign.

Emerson Hanslip, who attends Dudley Sixth Form and Georgia Whitehouse, from King Edward VI College, will be organising workshops in schools and colleges in the borough which they will use to educate their peers on a range of issues including the dangers of knife crime, county lines drug dealing and stop and search.

Knife crime has risen in the West Midlands by 85% since 2012, many of those incidents has involved young people.

The workshops, which include talks from the two students, also see students hear from someone who has a lived experience on the subject and a police officer. The sessions are now going to be happening in schools and colleges across the Dudley.

17 year old Emerson, one of the organisers of the campaign, presenting at the workshop.

Emerson and Georgia, who are the two elected Youth Commissioners for Dudley, are both sixth form students who have decided to put on these sessions in their spare time following a number of incidents in Dudley and the West Midlands involving knives.

Emerson Hanslip said: “As young people, it is absolutely vital that we tackle knife crime head on.

“In the last 12 months we have seen a number of young people fall victim to knife crime. We want to play our part to educate other young people on the risks of carrying a knife.

“The pilot workshops were hard hitting and we received excellent feedback. Now we are going to continue the campaign in schools across Dudley to educate other young people on the dangers and effects of carrying a knife.”

Georgia Whitehouse said: “Knife crime takes its toll on all of us. Seeing coverage of knife attacks makes us feel even more vulnerable being in an environment where danger lurks at every corner.

“We need to take on the issue, not just with information from the police, but also the knowledge of people and victims who have real, lived experience of knife crime.”

The Police and Crime Commissioner, David Jamieson added: “Emerson and Georgia are doing outstanding work in their community which I am only too happy to support. As young people themselves, they are well placed to connect with other young people.”

“They have taken the initiative to start this campaign focussing on the issues which are affecting young people at the moment and I am certain that when this is rolled out further, they will continue to be a success.”

Chief Superintendent Sally Bourner, Commander of Dudley said: “Emerson and Georgia’s leadership reflects the absolute imperative to involve and listen to young people as we focus on tackling and preventing knife crime.

“Their work supports the wider public health-based approach we are developing with partners across Dudley Borough to prevent serious violence ensuring our borough is a place of healthy, resilient, safe communities with high aspirations and the ability to shape their own future.”

Emerson and Georgia will be working closely with schools and colleges to ensure that any safeguarding issues that are raised whilst they are running these workshops are responded to appropriately.

The Sharpen Minds Not Knives campaign was piloted at the beginning of April and now Emerson and Georgia intend to roll their programme out across the Dudley Borough. It is part of the West Midlands Police Life or Knife campaign.