Dudley teenagers Louis Price and Jack Goodman have been shortlisted for a gong at the West Midlands Outstanding Citizens’ Awards.

Their nomination for the ‘Outstanding Young Citizen Award‘ is in recognition of their assistance to the emergency services in securing the safety of a missing person.

In September last year, the then 13-year-old friends assisted police and ambulance services in locating a high-risk missing person in Wrens Nest Nature Reserve. The missing person was 15 years old, pregnant and believed to be suicidal.

The teenagers guided police officers to the location of the missing person and as the daylight was drawing in, supported ambulance services in navigating the woodland to locate the missing person who was found to be very distressed and in need of medical attention.

The teenagers, nominated for the award by officers of West Midlands Police, showed maturity beyond their years recognising someone in distress and supporting the emergency services to be able to do their job.

“The boys showed maturity beyond their years. Not only did they recognise that someone was in distress and contact the emergency services, they assisted officers and ambulance services in getting medical attention to a very vulnerable member of society very swiftly. Their actions were greatly appreciated and are worthy of recognition.” 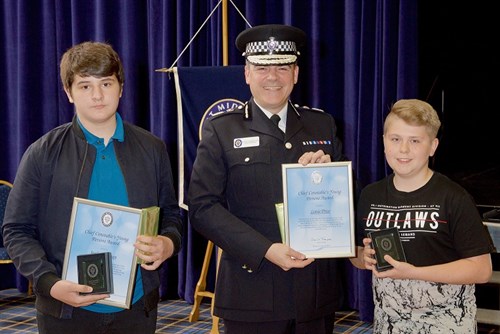 “We were doing something for our homework when we came across someone who was in need of  help… she was on the ground and we saw blood on her arm. She was in an unresponsive state… she found it hard to talk.

“After we called the ambulance, we waited for them to come. It was hard to get to her as it was really muddy ground then. When the ambulance came, we guided them [ambulance crew] through the Wrens Nest Nature Reserve to her. We got to the girl and gave her some water. She’d been there since 8 in the morning and we found her about 4 in the afternoon.

“We’ve told quite a few of our friends at school. We’re proud of what we did but we’re proud for our families too”.

“This award is our chance to shine the spotlight on some outstanding young people. Youngsters who have shown exceptional judgement and who have stepped up when faced with a crisis situation. It’s our opportunity to say thank you to them.”