FAREWELL AFTER 30 YEARS OF SERVICE

Assistant Police and Crime Commissioner, Ashley Bertie, has thanked one of West Midlands Police’s most respected officers for his service over the last 30 years. 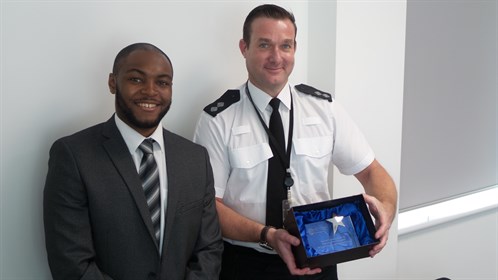 Inspector Dave Whordley, who retires in October, joined West Midlands Police as a Cadet aged just 17. For the last 3 years Inspector Whordley has been the force Bronze lead on reforming use of Stop and Search powers. The need for improvements in this area followed a report by Her Majesty’s Inspectorate of Constabulary, which criticised the force for how the discretionary power was being used in our region.

As Bronze lead on Stop and Search, Inspector Whordley helped reduce the number of times members of the public were stopped and searched from 64,000 in 2011/12 to 13,000 in 2016/17. He also made it more effective. When he took over only 4% of ‘Stop and Searches’ led to an arrest. Now almost one in three searches result in a positive outcome, with arrests following Stop and Search in excess of 20%.

His work retraining officers, helping devise new systems and monitoring progress has been recognised at both national and international level. It is also being used by other forces around the country as an example of best practice.

Assistant Police and Crime Commissioner, Ashley Bertie, said: “I’d like to say a huge thank you to Dave Whordley. Since he took charge of Stop and Search we’ve seen police use their power more effectively, fairly and proportionately. We’ll miss him and we wish him all the best for the future”.

Commenting on what has been a successful career, Inspector Whordley said: “Our recent work around Stop and Search has allowed us to better inform local communities on how police use the power. We now stop and search far fewer people and our success rate is far higher. The work has been a highlight of my 30 year career at West Midlands Police and I’d like to thank all my colleagues and friends at the force for their support and friendship.”