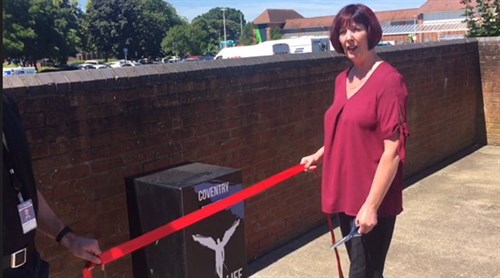 The West Midlands Police and Crime Commissioner has installed a 16thweapon surrender bin in the region.

The new safe and secure container, which is designed for people to safely dispose of knives, was unveiled today at ASDA, Abbey Park, North London Rd in Coventry.

Whilst this is Coventry’s first Weapon Surrender Bin, it is the 16th across the police force area. The PCC wants to see one in every local authority across the West Midlands.

Commenting on the arrival of the new bin the Assistant Police and Crime Commissioner, Dr Lynnette Kelly, said: “I’m very pleased we have been able to provide a surrender bin for my home city of Coventry.

“The bins give people a safe way to dispose of knives which they shouldn’t be carrying.

“Every knife posted into a surrender bin is potentially a life saved.

“These bins work best when the community wants them and in Coventry the message we have been receiving loud and clear is that more are needed.”

The other 15 bins are installed across Birmingham and the Black Country.

In a bid to reduce violent crime the PCC is also introducing gang negotiators, employing youth workers in A&E departments to spot people caught up in gang activity and investing in positive activities for young people.

Commenting on the new Coventry bin Ch Supt Mike O’Hara said: “This is a really welcome initiative, which will help the police in Coventry tackle the growing problem of knife crime.

“It’s very important that people know they have a safe place to dispose of a knife which they shouldn’t be carrying. If we can take knives off the streets of Coventry, then they cannot be used to commit a crime or cause injury.

“Sadly, knives are very easy to obtain. We have to ensure that people, particularly young people, are aware that if they carry a knife then it could be used against them.

“We are working closely with the community to highlight the risks of carrying and using knives and weapons.

“Alongside encouraging the disposal of knives, I would ask the public to give us any information that might help us to protect Coventry’s young people and I would urge them to contact us on 101 or through Crime Stoppers on 0800 555111.”

The 16 knife bin locations across the West Midlands are: