From India to Bognor – the tour which healed religious divides 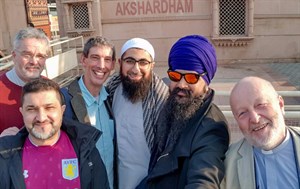 A group of Sikh, Christian and Muslim religious leaders from Smethwick are to be recognised by the West Midlands Police and Crime Commissioner for their efforts in bringing together divided communities.

The group, called ‘Faithful Friends’, formed in 2015 in an attempt to unify people in their area and to encourage understanding between religions.

In 2017 group members began taking each other on a tour of their ‘special spiritual places’ in an attempt to build understanding between faiths. The locations ranged from a field in north Cornwall to Amritsar in India. Even Butlin’s in Bognor Regis is earmarked as a future location.

Each religious leader shared a story with the rest of the group at their ‘special spiritual place’.

But it wasn’t just the leaders who were able to take part. Thanks to the group’s creative thinking they linked with schools via social media, filmed each visit and made 4-minute videos which are now being shared with school children and even prisoners.

The project was designed to establish dialogue and bring people together.

Commenting on being shortlisted for the PCC’s award, Rev David Gould, from Holy Trinity Church in Smethwick, said: “The project was formed out of a desire to build trust and friendship between cultures and religions.

“What we ended up with has included the opportunity for a change in the attitudes of a whole generation of school children.

“When we began the project I never could have envisaged that it would have had such a great influence. We really appreciate all the support we’ve had from charities and councils alike”

“Our region is a wonderful mix of faiths, cultures and backgrounds and this project has helped build on the tolerant attitudes that already exist.”

Coventry Cathedral has also recently recognised the group’s efforts when it handed it the ‘Together for Hope’ award which is a recognition of the quality of the reconciliation work being carried out.

A documentary telling the story of Faithful Friends On Tour and further visits are being planned.

For further information about the project: http://www.fncbham.org.uk/?page_id=1418