Going once! Criminals’ ill-gotten gains go under the hammer 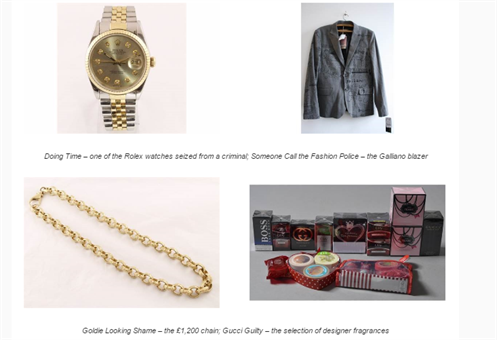 Rolex watches, gold chains and a Galliano blazer are among 80 items stripped from criminals in the West Midlands to go under the hammer.

The gaudy goods seized by West Midlands Police will be auctioned off on February 21 at Aston’s in Dudley.

The ill-gotten gains up for auction are a mixture of court seizures and Proceeds of Crime Act (POCA) and Police Property Act (PPA) items. POCA and PPA cash goes into the Commissioner’s £1 million Active Citizens Fund, which supports good causes around the region.

Items for sale include:

“This auction sends a strong message that crime doesn’t pay and justice catches up with criminals in the end.

“It is great to see that ill-gotten gains helping community projects across the West Midlands. The money raised from these auctions will make a difference to active citizens across the region.”

Chris Aston of Aston’s Auctioneers added: “These West Midlands Police auctions are the most exciting auctions we hold – with the biggest variety of items on offer – and they certainly make a change from the traditional antique auctions like people are used to seeing on TV.

“The best part for both ourselves and the bidders is the fact that all of the items are sold ‘without reserve’ so items start off very low, attracting plenty of bids and ultimately selling to the highest bidder with a 100% sale rate – the very definition of the word auction.”