Government backs PCC’s campaign to ban possession of zombie knives, but much more needs to be done to tackle violence 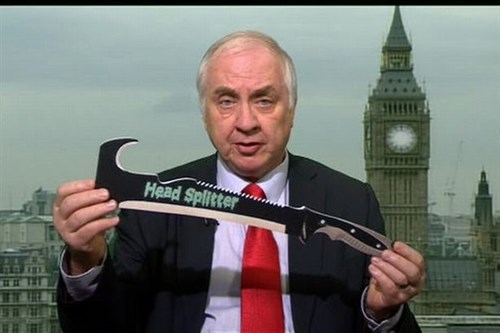 In 2016 the government banned the sale of zombie knives after a successful campaign led by David Jamieson. The government have now backed West Midlands Police and Crime Commissioner’s campaign to ban the possession of the dangerous weapons too.

David Jamieson was praised by government ministers and opposition frontbenchers for his campaign in 2016 and he is pleased that action is now being taken on possession of the weapons too.

The Home Office have announced the ban on possession of zombie knives as part of their Serious Violence Strategy. The PCC is concerned, that whilst there are some welcome steps, there is no mention of ‘additional resources for police forces and resources to support projects that are tackling the root causes of violent crime.’

West Midlands Police and Crime Commissioner David Jamieson, said:
“Zombie knives have no practical use and are purely designed to cause injury and death. With names such as Head Splitter and Death Dagger, no sensible person wants to see ‘zombie knives’ on our streets. They glamorise violence too.

“I am pleased that my campaign to ban the possession of these vile weapons has been successful too, but the government needs to go further still and ensure that other weapons with no practical use other than to harm people such as zombie crossbows and other dangerous weapons are banned also. In the last month the Home Office told me they had no intention of banning so-called zombie crossbows.

“The government needs to do much more to tackle violence on our streets though. I established a Commission on Gangs and Violence in the West Midlands which is focused on delivering opportunities for young people to turn their lives away from crime.

“ The West Midlands was the first area in England to bring in a public health approach to reduce violence. It means the health service are working alongside the police to reduce this kind of crime. Progress could be much quicker with more support from the government.

“In order to help reverse the current rise in violent crime I am investing an extra £2 million from my budget to tackle the root causes of violence. I hope as part of the government’s strategy there is also real action and additional financial support for areas such as the West Midlands that have been blighted by violence.

“We need more than just warm words and law changes to end the violence on our streets. We need additional resources for police forces and resources to support projects that are tackling the root causes of violent crime.”