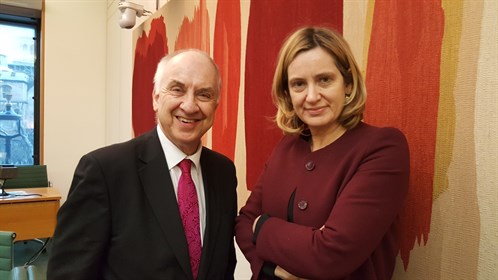 The West Midlands Police and Crime Commissioner will call on the government to match his £2 million funding for projects to tackle gangs and violence. David Jamieson is meeting with the Home Secretary in Westminster tomorrow (Wednesday 14th March 2018).

The government has previously announced £0.5 million to tackle knife crime across the whole country, which the PCC believes is not nearly enough in the current climate. The PCC wants to see that money increased and the West Midlands to get its fair share of funding.

Speaking ahead of the meeting with the Home Secretary, West Midlands Police and Crime Commissioner David Jamieson, said,

“I will be highlighting the work of the Commission on Gangs and Violence to the Home Secretary and asking the government to invest in the safety of the West Midlands by matching my £2 million investment. That match funding will help to expand the planned projects to tackle violent crime, make our communities safer and give young people the opportunities they deserve.

“When violence strikes it plagues our communities indiscriminately, leaving victims in its wake.

“In order to help reverse the current rise in violent crime I am investing an extra £2 million from my budget to tackle the causes of violent crime, I want the government to match my commitment and invest in keeping the communities of the West Midlands safe.

“I hope the government listens to the excellent work of the Commission on Gangs and Violence and supports my call for match funding.”