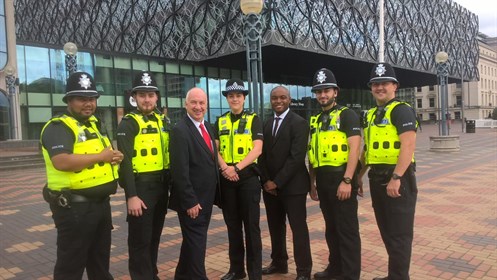 Home Secretary Amber Rudd MP has singled out West Midlands Police for praise following high-profile ‘pioneering’ work to increase the diversity of new recruits. The Police and Crime Commissioner (PCC) has made it a ‘top priority for West Midlands Police to look more like the people it serves’.

More than 3,200 people recently applied to be a police officer, more than 1,000 (33 per cent) of whom are from minority ethnic communities.

The Home Secretary Amber Rudd MP said in a letter to the West Midlands Police and Crime Commissioner David Jamieson:

“I am aware that West Midlands continues to be one of the forces that is most proactive in increasing the diversity of its workforce and I welcome the lead being taken by you (PCC David Jamieson) and Chief Constable Dave Thompson…Around two thirds of forces in England and Wales are recruiting and it is vitally important that this recruitment activity builds upon the example set by pioneering forces.”

“I have made it a top priority for West Midlands Police to look more like the communities it serves. We have started to deliver on this agenda and I am pleased the Home Secretary has recognised our work on diversity.”

Chief Constable Dave Thompson said: “We continue to strive for a more diverse workforce by bringing in people directly from the communities we serve.

“The area we police is richly diverse, with around 30 per cent of local people coming from ethnic minority backgrounds. We want our force to reflect that and it is vital that communities know that we have a strong commitment to equality and diversity.”