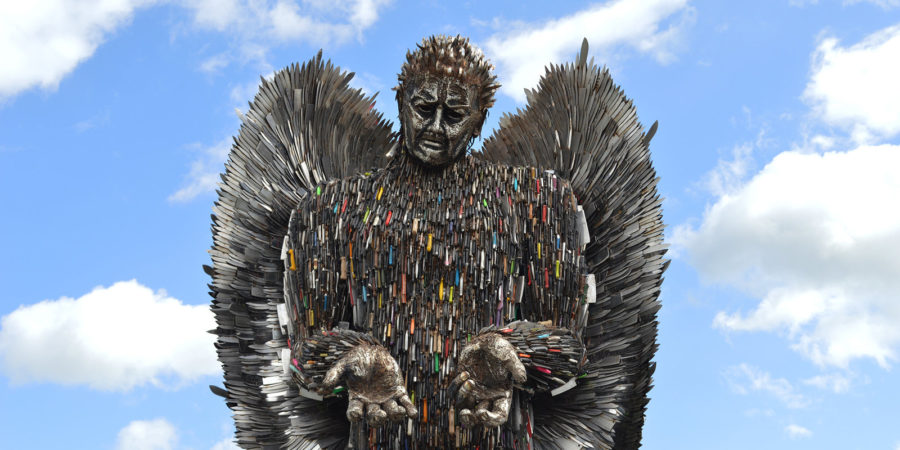 The West Midlands Police and Crime Commissioner and Leader of Birmingham City Council are hailing the Knife Angel’s stay in Birmingham a success.

The giant sculpture – which has been crafted out of 100,000 confiscated and surrendered knives – is set to leave Victoria Square this evening (Wednesday 12th June) after being on display for 5 weeks.

The PCC and City Council agreed to locate the Knife Angel in the city to raise awareness of the dangers of knife crime and to act as a reminder about the devastating effects of violence and aggression.

The iconic 27-foot sculpture, which was commissioned by the British Ironwork Centre in Shropshire, is on a tour of the UK. Prior to its arrival in Birmingham, it had been hosted by Liverpool, Hull and at Coventry Cathedral.

Whilst in Victoria Square, the Angel has been seen by thousands of people and has helped to raise awareness of knife crime.

The West Midlands Police and Crime Commissioner, David Jamieson, said: “Knife crime has now got to the stage where it should be classed as a national emergency by the government.

“In the West Midlands knife crime has risen by 85% since 2012 and shows no sign of abating. Last year there were 50 murders carried out by people using knives.

“It is a similar story across the country.

“For the last month the Knife Angel has proved a powerful reminder to the people of Birmingham about the dangers posed by knives.

“I’d like to place on record my thanks to Clive Knowles of the British Ironworks Centre for making all this possible.”

During its stay, the sculpture has attracted interest from visitors, residents and workers and has provided a focus for arts activities as well as acts of remembrance for those who have lost their lives as a result of knife crime.

The Leader of Birmingham City Council, Cllr Ian Ward, said: “”The Knife Angel’s presence in the city centre has certainly got people talking and thinking about how we, as a city, tackle this national issue.

“During its stay we’ve seen people of all ages, but particularly young people, engage in activities inspired by the Angel, making their voices heard on this national issue. They are as keen as the city’s leaders, if not more so, to see an end to all violence – they don’t want their generation, or future ones, to be defined by this.

“We all have a part to play in tackling knife crime – Government, councils, the police, communities, schools and individuals. I truly hope the conversations which are happening now will continue, so we can understand what is driving this crisis and address the reasons why young people are choosing to carry knives.”