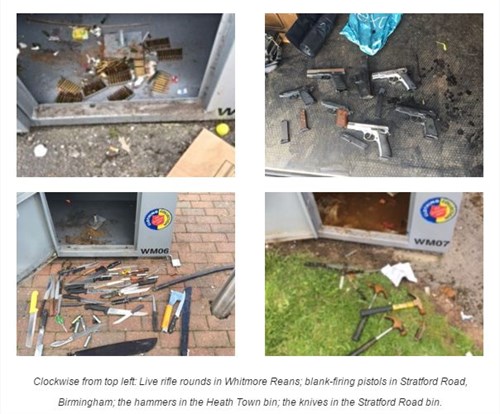 More than 100 live rifle rounds were found in a weapon surrender bin in Wolverhampton.

Other finds across Birmingham and the Black Country included a stun gun, six blank-firing pistols, hammers and a total of 132 knives.

The 102 military-calibre rifle rounds were left in the weapon surrender bin at the Tabernacle Baptist Church, Dunstall Road, Whitmore Reans, Wolverhampton, along with nine kitchen knives, two folding blades and one homemade knife.

In Birmingham, six blank-firing pistols were deposited in the Stratford Road Aldi bin, as were 30 domestic knives, one sheath knife and two machetes.

In the Lozells Road bin at the New Testament Church Of God were 16 kitchen blades, one soft air revolver and a stun gun designed to look like a torch.

And in Heath Town, Wolverhampton, there were three hammers, five kitchen knives and a folding blade.

Assistant West Midlands Police and Crime Commissioner Ashley Bertie, whose office supports the 13 surrender bins across the Black Country and Birmingham, said: “These potentially deadly weapons are now off the streets once and for all and have been destroyed.

“These bins are only successful if the community supports them and I would like to thank everyone who deposited a weapon for doing the right thing.

“Our streets are safer as a result of these bins. If anyone out there has a weapon – or knows someone who does – I would urge them to get rid of it in a surrender bin as soon as possible.”

A full list of contents found in the bins is below:

All of the weapons have now been removed and disposed of.

The full list of bin locations can be found here.