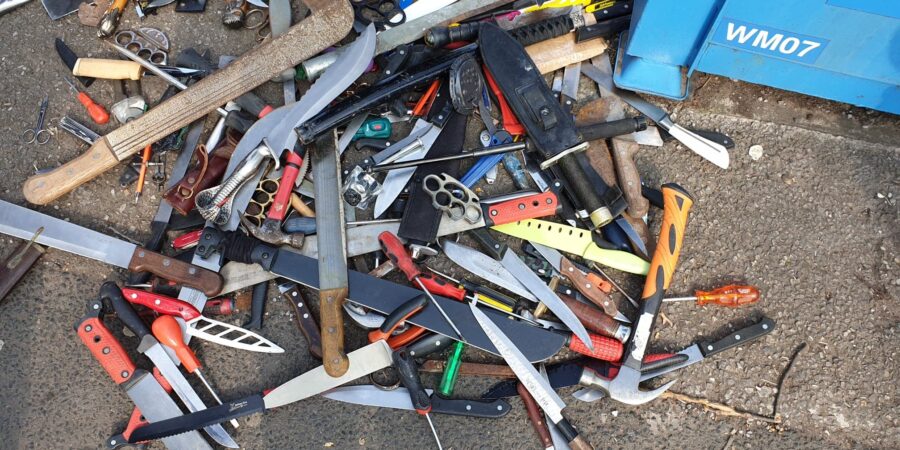 More than 800 knives, knuckle dusters, bullets and even a bayonet have been emptied from the West Midlands Police and Crime Commissioner’s Weapon Surrender Bins.

The secure post box sized containers, dubbed knife bins by many, are strategically placed across our region as part of a concerted effort to get weapons off the streets and reduce violence.

In all there are 19 Weapon Surrender Bins and that number is rapidly growing as demand for the safe and secure boxes gathers pace.

They are just one of the many things being done by the PCC and West Midlands Police to address knife crime which includes educating young people on the risks and dangers of carrying a knife.

Knife crime has more than doubled in the West Midlands since 2012 and is a problem across the rest of the country too.

An extra knife bin is due to open in Coventry in the next few weeks.

The Deputy Police and Crime Commissioner Waheed Saleem, said: “Worryingly knife crime has been rising across the country during the last decade and people are understandably concerned.

“Our knife bins are proving a very useful tool in tackling knife crime and are now being used widely by the public.

“Too many people are killed or seriously injured by knives and we must all act to prevent further needless deaths.

“I would urge anyone who carries a knife to think twice and to use your nearest knife bin.”

A full list of the Police and Crime Commissioner’s weapon surrender bins can be found here.

The police and crime commissioner recently warned about the potential for a ‘tidal wave of violence’ on our streets as lockdown eases and the economy falters.

Other measures the PCC has put in place to tackle knife crime include mentoring in schools, gang mediation teams and specialist intervention by the region’s Violence Reduction Unit.