Get a Life, Bin that Knife

Pictures of a fearsome collection of weapons found in knife surrender bins are being released this week, coinciding with the launch of a new bin in Aston. 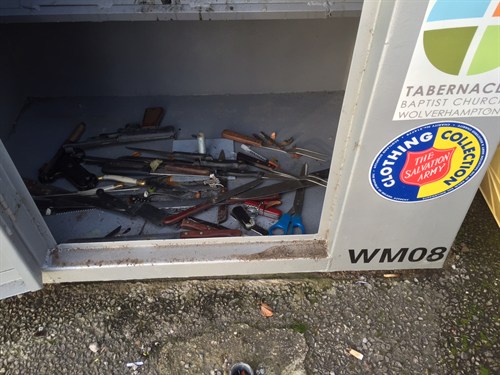 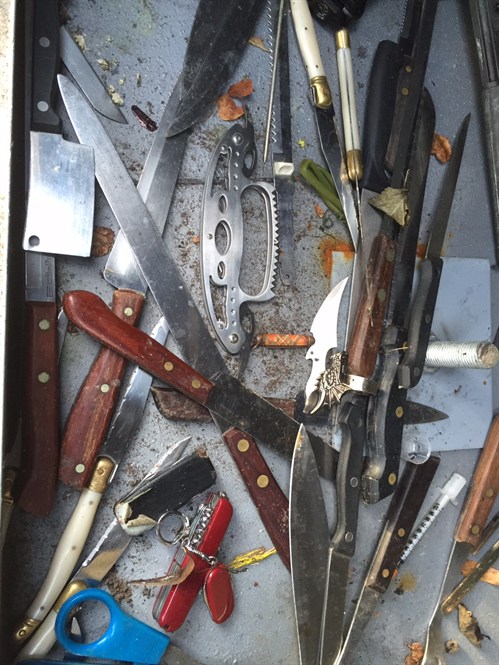 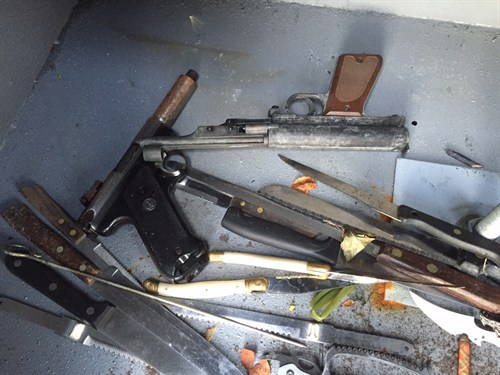 Pictured above: Contents of the Whitmore Reans, Wolverhampton bin, when opened in December 2014

The weapons from collected from all of the bins include 153 knives, a gun, a live round of ammunition, a replica firearm and two knuckle dusters.

PCC David Jamieson said:  “This latest bin is adding to several installed last year that have more than proven their worth.  Some of the weapons we have found deposited in the bins included two firearms, a knuckle duster and an assortment of flick knives, were clearly produced to inflict serious injuries.  Some of other items such as kitchen knives, saw blades and a syringe have been safely disposed of in the bins and cannot fall into the wrong hands now.

“The bins have given people a place to off-load items, which could have destroyed lives.   They are being successful because the community wanted them and are working hard to make sure people use them. I would like to express my thanks to the organisations that have agreed to host the bins and for everybody who is helping to spread the message that the carrying of weapons is not welcome in our communities.  It is entirely due to this ground swell of support from the community that the bins have achieved these results. ”

Tesco Aston Store Manager David Harman said:  “Tesco is pleased to support the local community in Aston by hosting a Knife Surrender Bin and hopes the scheme contributes to a safer neighbourhood for all.”

Chief Inspector Kath Davis said: “The knife bins are part of an overall programme that includes education in schools, which helps young people to understand the very serious risks they run by carrying weapons.  Many of the weapons that were recovered in December could have caused life threatening injuries. People have chosen to do the right thing and deposit these weapons in the bins and by doing so have potentially saved lives.  It is good news for everybody to know that these weapons are now out of circulation and off the streets of the West Midlands.”

Mike Smith from Word 4 Weapons said: “People have taken a positive decision to dispose of these weapons safely and by doing so, may have made the best decision of their lives.  They have chosen not to run the risk of lashing out in the heat of a moment, and unleashing a set of circumstances in which nobody can ever be a winner.  It is good to see that the message is getting through that carrying a knife is not a way to protect yourself.  The chances are much greater that your own knife will end up being used against you.”

Annette Taylor from Unity in the Community said:  “We are working to get the message through to young people that what happens in a few seconds when a knife is used can have devastating consequences that will affect many, many people.  When somebody dies from a stabbing, we know that their family begins a lifelong sentence of grief.  But what is often overlooked is the suffering that it leads to for the family of the perpetrator, who find themselves carrying part of the blame for what their relative has done.  Their lives are destroyed too because they end up being isolated from their community.”

Community representative Desmond Jaddoo said: ” ‘Get a life, bin that knife’ is the message being spread to anyone thinking about carrying a blade in Aston. We want to deliver a clear message carrying of weapons is not acceptable and we will continue to do everything we can to make sure it is understood everywhere.”

Kathleen Harris, mother of Christina Edkins, who was a victim of a fatal knife attack on a bus in March 2013, said:  “When I helped to launch the knife bin in Edgbaston, I said that if only one knife was put in the bin, it would potentially be a life saved.  Each knife that has been recovered represents a possible tragedy that has been stopped from happening.  It is up to everybody in the community to take responsibility and make sure that we continue to spread the message to dispose of knives safely before more people end up having to suffer the awful consequences.”

Information about other knife surrender bins in the West Midlands, including maps of locations is available here.