Examples of courage, selflessness and devotion to others, were celebrated at an awards evening (on Tuesday June 30th) which honoured some of the West Midlands’ finest community heroes and heroines.

The search to find this year’s Outstanding Citizens, was launched by the West Midlands Police and Crime Commissioner back in January. The awards evening brought together all those nominees who were short-listed in the three categories of: Outstanding Citizen, Outstanding Young Citizen under the age of 18 and Outstanding Community Project.

Speaking at the event, David Jamieson told award recipients: It is people like you who make our communities safer and happier places to live and work.

“I have personally been overwhelmed by the quality of nominations received this year. There have been many accounts of selfless devotion and acts of bravery. What shines through is the fact that here in the West Midlands we have a great many kind and good-hearted people who are willing to put themselves out and help their neighbours.”

The Winner of the Outstanding Citizen Award 2015 is Cedric Lea from Balsall Common. Cedric was instrumental in setting up a unique service which updates residents on local issues and shares villagers concerns with the local council and police. Although he is now in his 70s and not in the best of health, he tirelessly continues to support residents in his village. He is also treasurer of a local community magazine, a member of the residents association, helps to set up neighbourhood watch scheme and is an active participant in the local school. 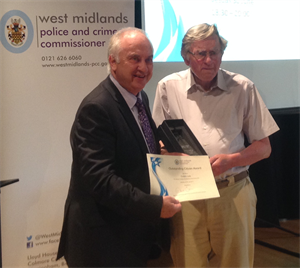 The award for Outstanding Young Citizen under the age of 18 went to 17 year-old Chloe McGann from Erdington. Chloe was just 16 when she witnessed the vicious attack and robbery of a fellow passenger whilst she was travelling  on a bus through Erdington. During the unprovoked and sickening attack by four men who later fled the scene, the victim was knocked unconscious and stopped breathing. Chloe, who as a member of the Young Fire-fighters Association was fully trained in first aid, stepped forward and immediately commenced first aid, staying with the victim until an ambulance arrived. 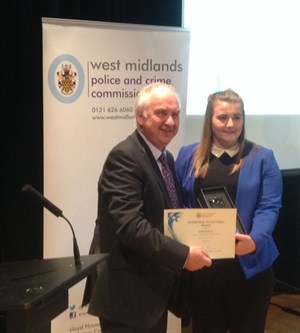 Lye-based charity, Apni Zaroorat Community Network (AZCN) scooped the ‘Outstanding Community Award.’ The group, whose name in Urdu means “Our Needs” is based at Valley Road Youth Centre in Lye and works to improve the lives of women, young people and their families from all ethnic backgrounds. The women volunteers, who run the youth group dedicate much of their free time, encouraging local youngsters to take part in positive activities in a bid to discourage anti-social or criminal behaviour. 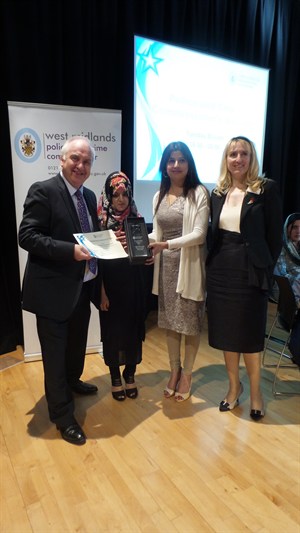