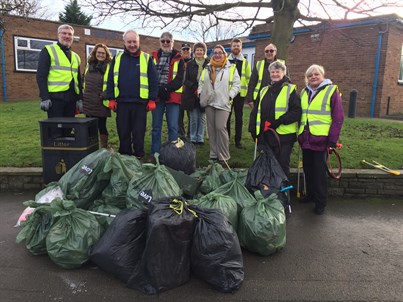 The West Midlands Police and Crime Commissioner has given £5,000 to a community project to help clean the streets of Solihull as well as reducing anti-social behaviour.

David Jamieson is using money seized from criminals to pay for the litter picking programme launched by Talking Rubbish in the Solihull area.

The grant is going towards the Talking Rubbish programme and will pay for equipment to pick up litter.

The initiative aims to keep the streets of Solihull clean and make the community better for everyone.

The PCC has provided £5,000 to the project. The money comes from the Active Citizen Fund which is paid for by money seized from criminals. This funding must go to community projects and cannot be spent on recruiting officers. Communities can bid for the cash all year round if they believe they have a project which can reduce crime.

The project has been running for three years and has over 300 members. Across the borough there is at least one group out picking litter every week.

Although the scheme was set up initially to improve the environment there have been the added benefits of reducing anti-social behaviour and bringing communities closer together.

As well as receiving funding from the PCC Talking Rubbish is also working in conjunction with the Love Solihull team from Solihull Council.

Police and Crime Commissioner David Jamieson said: “It is important that communities take the initiative to take care of their local area.

“I am pleased to see that my Active Citizens Fund is being used to help improve the environment in the West Midlands and increase community engagement.

“By ensuring that our streets are clean and having people out every week there is no doubt that they are having an impact in preventing crime”.

Founder of Talking Rubbish Chris Dunster said: “I am very pleased that the Police and Crime Commissioner has been able to fund our project.

“I believe that it is important that we take the time to look after our local community.

“Areas that are cared for by the local communities experience less crime”.