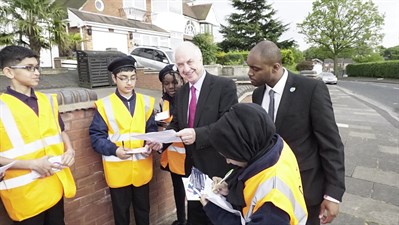 The West Midlands Police and Crime Commissioner can reveal there are now more than 100 police cadets in place across the force area.

The youngsters belong to 5 units. All are under 18 years of age.

The new cadet scheme, which was an election pledge by the PCC, began in the autumn of 2017 and has been designed to act as a vital link between the force and young generations. The cadets take part in activities such as crime prevention work, community volunteering, learning about policing and attending large scale events like Birmingham Pride and Remembrance ceremonies.

The units are based in Birmingham, Sandwell. Dudley and Coventry; with others expected to be rolled out in future.

Some of the young people may well go on to be police officers, whilst others will use the scheme to gain vital skills which will help their future careers.

The cadet initiative was established to provide young people with a greater sense of community, inclusion and purpose. The aim is to build self-esteem and develop leadership skills which will set them up for future employment.

The West Midlands Police and Crime Commissioner, David Jamieson, said: “This was a key promise that I made to the public in my manifesto and I am delighted we have now recruited more than 100 cadets.

“It is fantastic to see how quickly the scheme has grown and how popular it is proving.

“It is now really clear that it is making a real difference to the lives of more than 100 young people in our region.”

Assistant Chief Constable, Sarah Boycott, from West Midlands Police said: “We are very proud of the success of WMP Cadets since its relaunch last year.

“Cadet schemes are popular and to already be running successfully in four areas of the West Midlands is wonderful for the force, the young cadets and the communities they are a part of.

“They are a key part of increasing our engagement with local people, while giving us the opportunity to bring police and local young people closer together.

“We very much look forward to seeing units operating across the entire force over coming months, building those important relationships.”