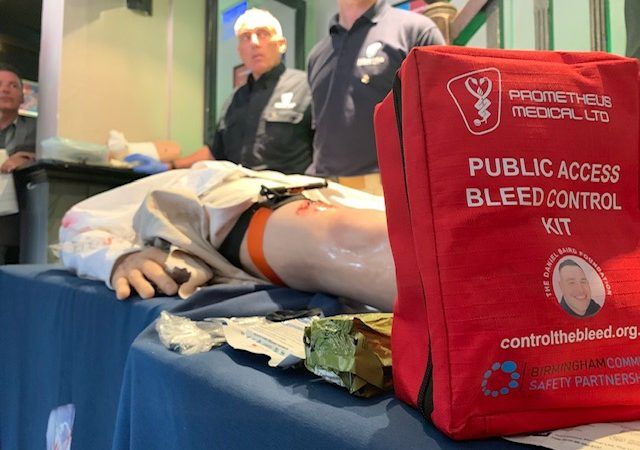 More than 200 kits designed to control bleeding after someone is stabbed or cut have been placed at strategic locations across the West Midlands.

The new life-saving packs, which include bandages, tourniquets and gloves have been paid for by the region’s Police and Crime Commissioner, David Jamieson.

The medical supply packs are located in key areas across the region, including Wolverhampton, Sandwell, Dudley, Birmingham, Walsall, Solihull and Coventry.

In total there are 227 bleed-control kits situated in bars, pubs, shopping centres and schools across the West Midlands. The PCC is aiming for that number to rise to 400.

They are designed to be easy to use and to keep an injured person alive until they can receive treatment from a paramedic or doctor.

The roll out of the kits follows passionate campaigning from Lynne Baird. Lynne tragically lost her son Daniel in July 2017 after he was stabbed to death in Birmingham. She has since set up the Daniel Baird Foundation which campaigns for bleed control kits to be placed in locations that are easily accessible to the public.

Knife crime has doubled in the West Midlands since 2012 and the Police and Crime Commissioner has been keen to ensure these kits are distributed across the region to give victims the best chance of survival.

A map showing where your nearest bleed-control kit is situated can be found here.

On average it takes an ambulance 7 minutes to reach a patient, but bleeding from serious injuries can prove fatal in as little as 3 minutes.

Commenting on the roll out of the kits, David Jamieson, the West Midlands Police and Crime Commissioner, said: “The bleed-control kits are a simple yet smart idea that have been designed to save a life. That is why I took little convincing that we should roll them out across our region.

“Sadly, knife crime has been rising across the country in the last decade, and so too has the number of fatalities.

“These new kits are good value for money and if they save just one life then they will have been worth the investment.

I’d also like to praise Lynne Baird for her excellent tireless work on this issue. Without her none of this would have been possible.”

Lynne Baird, who has been campaigning for the kits to be rolled out since the tragic death of her son Daniel, said: “Sadly in 2017, when my boy was attacked, there wasn’t a first aid kit to hand in the area. Had there been, then Daniel might still be with us today.

“I would love it if these kits could be placed in every busy area of the West Midlands.

“We know how important it is that when someone is stabbed, cut or injured that they receive first aid treatment straight away. These kits are designed to save lives and I’m delighted so many are now in areas near to where they are needed most.”