A mother who lost her son in a road traffic accident has been nominated for West Midlands Outstanding Citizen of the Year Award. Sukhjinder (‘Sukhi’) Atwal’s nomination is in recognition of her campaigning to promote the use of seatbelt safety.

In 2015, Sukhi’s 12 year old son Amar was ejected from a vehicle during a road traffic accident. He was not wearing a seatbelt at the time of the incident. Following the tragedy, Amar’s organs were donated, leading to successful heart, liver, kidney and pancreas transplants.

After a court case that led to the conviction of the driver of the offending vehicle, Sukhi gave her consent to the release and broadcast of the CCTV footage of the incident that killed her son as part of the Central Motorway Police Group’s national seatbelt campaign.

Her campaigning has taken her to schools to discuss seatbelt safety with pupils, as well as to the sofas of Good Morning Britain when she and her husband Harbajan talked to Suzanne Reid and Piers Morgan about their tragic loss and the measures to prevent other families having to go through their ordeal.

Sukhi Atwal, on being nominated for the West Midlands Outstanding Citizen Award 2017, said:

“I don’t want any other family to have to go through what we have. So many people don’t realise that it can happen to someone in their family. An incident can happen in just 1.6 seconds.

“When I’m in schools, we ask pupils at the start of our session how many of them wear a seatbelt or booster seat and usually we find about a third don’t.

“I’m chuffed to be nominated as it will help to raise the profile of seatbelt safety… this is all about helping others. I’m doing this for Amar and to ensure that no other family has to suffer the loss that we have.” 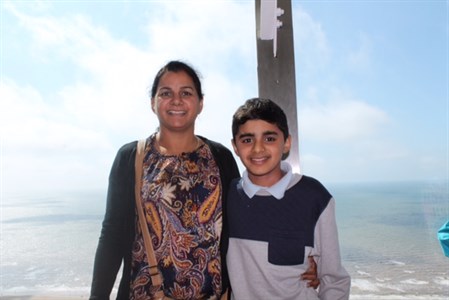 “The West Midlands Outstanding Citizens’ Awards is our chance to recognise the truly extraordinary courage and bravery of some of our fellow citizens.

“We are in admiration of Sukhi Awtal for her incredibly positive response to the tragedy that she and her family have gone through.

“From the decision to donate her son’s organs to her commitment to educating children in schools and the public through her media work, it’s a great honour that we’re able to recognise her as a nominee for the West Midlands Outstanding Citizen Award.”