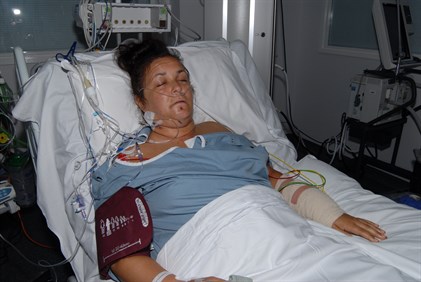 A woman whose former boyfriend stabbed her eight times whilst she was pregnant has welcomed the announcement that a new scheme, which will offer victims of serious crime the chance to quiz and get answers from their offender, is to be launched.

Janika Cartwright, who was attacked with a knife whilst she sat in her car in Birmingham in 2013, is backing the West Midlands Police and Crime Commissioner’s new programme of restorative justice.

Commissioner David Jamieson is introducing the initiative to help victims recover and get closure as well as to help change offenders’ behaviour.

Restorative justice will only be offered when the offender has been convicted and the process is completely voluntary. The offender must also agree to be involved.

The scheme has proven to help people recover from their ordeal. It also gives offenders a chance to understand the harm they’ve inflicted.

The £1.4 million investment will deliver restorative justice over three years.

The money can’t be spent employing more police officers and instead has got to be used to pay for services which help victims.

The PCC became determined to ensure everybody in the region has access to restorative justice after hearing Janika’s story.

She was attacked by her former partner with a knife as she sat in her car outside a Stirchley gym with her 9 month old baby asleep on the back seat.

One of the eight stabbings pierced Janika’s heart. Miraculously she and her unborn son survived.

Her former partner, Leon Harrison, was later convicted and is still behind bars after being handed a seven and a half year sentence for attempted murder.

Following the attack, Janika took part in a restorative justice programme. This enabled her to meet with Harrison in prison and get many of the answers she so desperately needed.

Describing her experience, Janika said: “Being stabbed repeatedly by the man I loved was the most terrifying experience. I thought I was going to die.

“I was scared for my own life, but being pregnant and with my 9 month old baby on the back seat I couldn’t run.All I could do was kick and punch to defend myself and scream for someone to help me.

“You hear about these kind of attacks, but you never think it will happen to you.

“As I recovered from open heart surgery I soon realised the wounds from that afternoon weren’t just physical. They were going to have a lasting psychological impact too.

“That is why I fought to get the answers from the person who tried to kill me.

“I heard about a process called restorative justice and asked if it was something I could be involved with. I felt it would help me come to terms with what had happened.

“Eventually, I was able to go to the prison where my ex-partner was being held and meet him face to face to ask all the questions that had plagued my mind since the day he attacked me.

“I wanted to tell him the impact his actions had on me, my children, my family and my friends.

“Restorative justice gave me some closure. Without it I can’t imagine how I would have come to terms with what happened.”

The West Midlands Police and Crime Commissioner, David Jamieson, said: “Janika’s harrowing story had a profound impact on me, as I’m sure it will you.

“But once I heard how she was able to move on with her life after engaging in a programme of restorative justice I knew I needed to make the service available to victims right across the West Midlands police force area.

“Restorative justice is an initiative that is proven to reduce harm and help people put a traumatic incident behind them. It also helps prevent re-offending by ensuring those guilty of a crime see the harm caused.

“It is vital people have access to restorative justice no matter where in our region they live.”

The organisation who will provide the restorative justice service for the West Midlands is Remedi.

Its Assistant Director is Christopher Hickin, he said: “Remedi is immensely proud that it is the organisation entrusted to give victims of crime in the West Midlands access to restorative justice.

“Having delivered restorative justice for 22 years across all forms of the criminal justice system we have seen, first hand, the impact it can have on people’s lives. It can be such an empowering process to go through.

“Remedi is committed to delivering a safe, local and victim centred approach and we can’t wait to get started.”